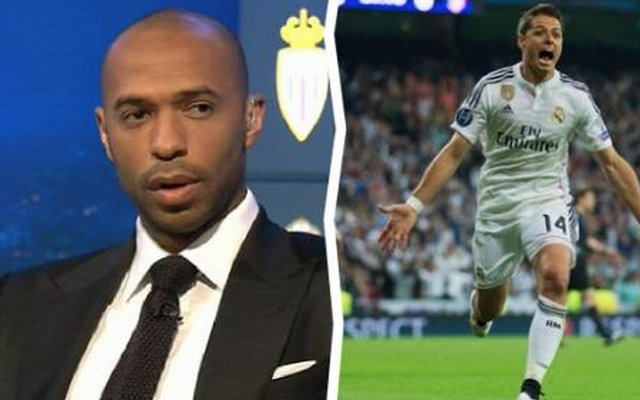 Thierry Henry has hit back at his critics slamming him for criticising the celebration of Javier Hernandez after the striker didn’t acknowledge the assist from Cristiano Ronaldo.

There was just one goal scored over two legs of the Champions League quarter-final between Spanish rivals Real Madrid and Atletico Madrid – coming from Manchester United loanee Chicharito.

The forward, however, had team-mate Ronaldo to thank for his strike, as the Portuguese unselfishly chose to pass in the box, rather than shoot – and Sky Sports pundit Henry was quick to blast Hernandez for not hailing the Portuguese for his final ball.

The Arsenal legend wasn’t impressed with the 26-year-old for running off ‘like he’d won the World Cup’, as quoted by the Daily Mail.

The 37-year-old has since taken to Twitter to defend his opinion, posting a Michael Laudrup compilation video to support his view that the final ball is crucial – often more than the goal itself – and deserves acclaim.

Football is a team game. Yes CH14_ scored the all important goal but the work of @cristiano made it possible. It cannot be underestimated.

I love it when players celebrate and acknowledge the player that made the assist. The pass can be just as important as the goal. — Thierry Henry (@ThierryHenry) April 23, 2015