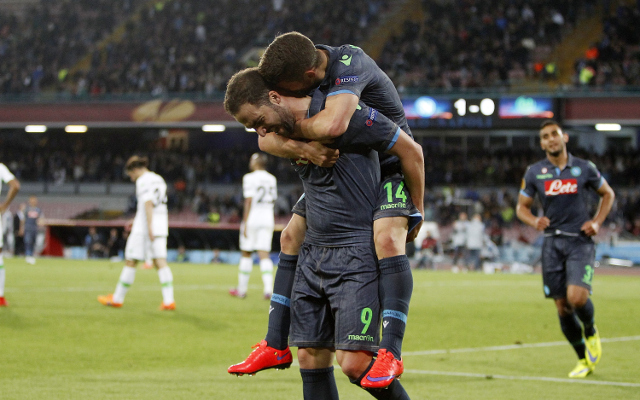 Despite failing to seal a victory in the second leg, as Wolfsburg came from 2-0 behind to level the score on the night, Napoli have proved why they are the team that Fiorentina, Sevilla, and Dnipro will want to avoid in the semi-final draw of the Europa League.

Rafael Benitez’s men went into the match with a seemingly unassailable lead after humiliating the Bundesliga side in the first clash between the two last Thursday.

A 4-1 win against the side that have proved to be Bayern Munich’s biggest challengers in the German top flight this season meant that the game in the Stadio San Paolo was going to be nothing more than a procession, unless Dieter Hecking’s side could make a fast start.

They did, but the Serie A side soaked up the pressure with an arrogance, almost as if they were aware of what was coming, and were therefore happy to sit back. They weren’t punished.

The second half saw Napoli put their foot on the accelerator. Ten seconds before the opening goal, the ball was being nonchalantly played around in the home side’s half by the visitors.

Once the Italians decided they had had enough of watching Wolfsburg’s tidy but non-penetrative possession, they stole the ball, and two passes later, the score was 1-0 as Jose Callejon’s deflected effort looped over the helpless goalkeeper, who was perhaps expecting another quiet half.

Their second goal was equally as ruthless as Dries Mertens refused to be beaten when his first effort was parried away. He managed to react quickly as the ball came back within his reach, and lifted it over the keeper.

With the tie in the bag, Benitez’s men took their foot off the pedal. And while they conceded twice – and will receive a hairdryer response if their manager’s reaction was anything to go by – they dictated how the game was played. If Wolfsburg enjoyed a period of possession, it was only because Napoli had decided to soak up the pressure, before striking like a coiled viper.

With their quality in attack, they will surely have the belief that even if they trail in the semi-final, no deficit is big enough not to overturn.

The smart money would suggest that if he is to leave in the summer, Rafa Benitez will Napoli depart having just secured his third trophy in this competition.