Jordan Henderson admits he needs to improve his goal-scoring record for Liverpool if he is to be considered one of the best midfielders in the Barclays Premier League.

The Reds vice-captain, who signed a new long-term deal with the club earlier in the week, has been a stand-out performer in a difficult season for the Merseyside outfit. He has scored seven goals in all competitions to date and is just four short of the target that he set himself before the campaign began:

“At the start of the season my goals target was around the 10 mark, but throughout the season your position changes and your job changes within the team so then you can’t really put a figure on it.” he told the club’s official website.

“Ideally, if you’re playing as an attacking midfielder you want to be getting a minimum of 10 goals a season.” 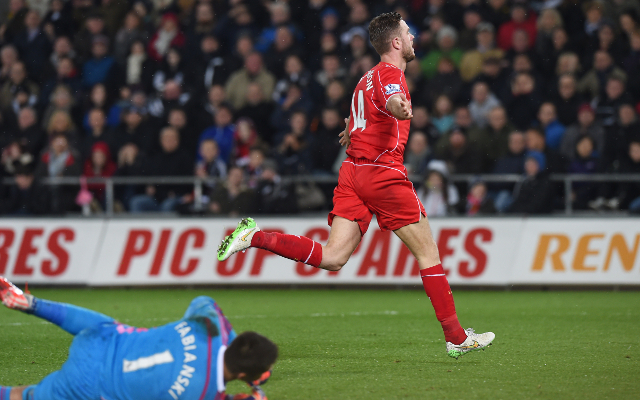 The England international is in line to succeed Steven Gerrard as club captain when he departs for MLS side LA Galaxy in the summer and Henderson admits he needs to emulate the contributions of the Kop legend if he is to take his game to the next level:

“Obviously you look at Stevie, who’s done it for many years and scored a lot of goals in the Premier League. I think Frank Lampard’s a good example of arriving in the box and scoring a lot of goals.”

“I just need to continue looking to pick my moments. That’s the most important thing for me – always making the right decision of when to make the run to try to break the line.” he explained.

Liverpool are next in action on Saturday when they are the visitors to the Hawthorns for a clash with West Brom and the Reds will be fully aware that anything less than a win could see their faint hopes of finishing in the top-four evaporate for good.