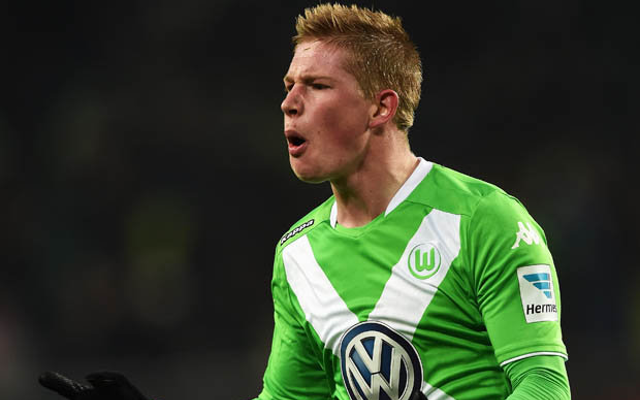 Wolfsburg are open to tying Manchester City and Manchester United target Kevin de Bruyne to the club with a new deal, a move which would dissuade potential suitors.

The Belgium international has been in superb form this season, bagging 10 goals in 29 Bundesliga matches. He has also contributed an impressive 17 assists, prompting talk of a move away from Germany.

He only left Chelsea last year after playing only three Premier League appearances for the Pensioners in two years at the club, but may well be in line for a return to England.

Manchester United and Manchester City have both been linked with a move for the player, despite the ‘astronomical fee’ it would take to lure him away from Wolfsburg, according to the player’s agent.

The club—who currently sit second in the Bundesliga table—are also looking to raise de Bruyne’s value even more by tying him to a lucrative new deal.

“Fundamentally, Kevin still has a long-term contract [until 2019],” began Klaus Allofs, the club’s sporting director, in discussion with Bild.

“But when a [player’s] development is exceptional it’s completely possible that we will all sit down together to take another look at the conditions of his contract.”