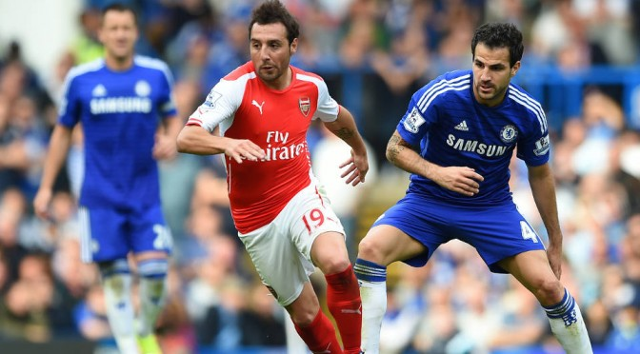 As ridiculous as this claim would have looked at the start of the season as Arsene Wenger received endless criticism from Arsenal fans as well as ridicule from opposition supporters and pundits, it looks as though the Gunners were right to snub the chance to re-sign Chelsea’s Cesc Fabregas from Barcelona.

The Spanish playmaker started in brilliant form for the Blues, contributing two goals and 11 assists in his first thirteen games as he struck up a dream partnership with fellow summer arrival Diego Costa. Since then, however, the contribution to Chelsea’s attack has dried up significantly, and the tired-looking 27-year-old has only one goal and two assists in his last fifteen games.

In fairness, Chelsea fans will point to his total of five goals and 19 assists in all competitions over the course of the season as an excellent return, with the former Gunner’s style of play crucial to improving Jose Mourinho’s side sufficiently to make them far and away the best team in England this season. Arsenal fans, however, should not be so concerned about missing out on their former player.

Truthfully, looking at Fabregas on current form up against Wenger’s current choice of midfielders, it’s hard to see where he’d fit in, or if he’s really what they need. Wenger said in the summer that the decision not to re-sign his former captain was due to the presence of so many other similar midfielders, and it looks like he’s right; Santi Cazorla in particular has adapted superbly to a new deeper role this season, providing the kind of energy and end-product that the team so desperately needs from that area.

Although Fabregas’ overall goal contribution is higher, it is worth noting that with seven goals and ten assists, Cazorla is more of a goalscorer himself, providing the option of a stinging long-range shot from the middle of the park, as well as more of a poacher’s instinct than his fellow countryman.

With the likes of Olivier Giroud and Alexis Sanchez not as prolific scorers as Diego Costa, players like Cazorla, Mesut Ozil and Aaron Ramsey providing a bit more of a goal threat from midfield is essential. Fabregas never quite showed that in his time as an Arsenal player and doesn’t look like doing so for Chelsea either. It might well suit the Blues to simply let Fabregas be the creative hub of the team, but that’s still no need for Arsenal to feel like they’re missing much, as Cazorla has sufficiently evolved their game to suit their style far better.