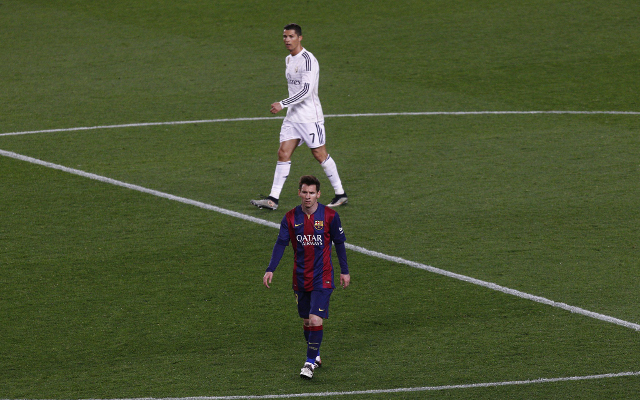 There may never be a better chance than this to see two of the world’s greatest ever footballers facing off in the world’s biggest game before passing their peak: football fans all over the world should be hoping we have the first ever El Clasico Champions League final in Berlin this June.

With the semi-final draw made this afternoon, much of the reaction has been to Pep Guardiola leading his Bayern Munich side out against former employers Barcelona – the club he played for and managed to tremendous success – though it says something that that is arguably not the biggest outcome of the latest set of Champions League fixtures.

Real Madrid against Barcelona has long been regarded as the biggest rivalry and perhaps even the biggest game in world football; few other duopolies have dominated so resoundingly in one league, and few have provided so many of the world’s best ever players – Zinedine Zidane, Diego Maradona, Alfredo Di Stefano and Johan Cruyff to name but a few.

Follow the Champions League with our FREE Football video app!

Despite all that, the two clubs are possibly bigger now than they ever have been, and it feels like the last few years have all been building up to this great moment; the two Spanish giants have robbed the Premier League of dominance in Europe by poaching its best players in Cristiano Ronaldo, Gareth Bale and Luis Suarez, and now they could square off in what would truly be an all-star exhibition match at end of the season.

We have all been priveleged to watch Ronaldo and Messi fight it out for supremacy every season for the last five years or so, and it may be that after this season they will inevitably start to feel the effects of age and of so many hotly contested battles at the top level for so long. This is arguably the last chance we could see them both at their peak in such a big game. We’ve seen both players do the unthinkable time and time again, and a European Cup final between the two superstars is the only missing ingredient now to this incredible story.

The debate rages on about which player is the best; everyone has their favourite, and all kinds of different stats exist to backup either choice. Perhaps, however, this game could finally settle it once and for all.