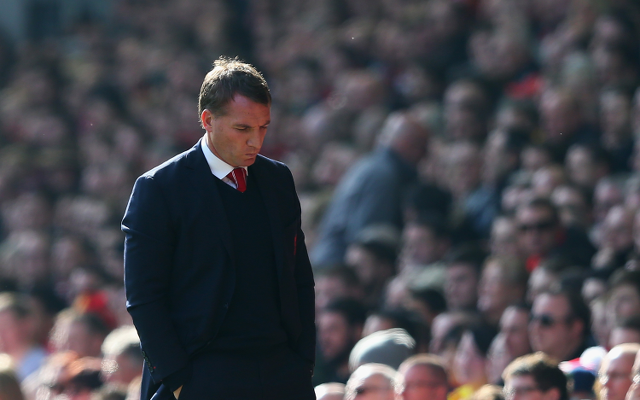 Liverpool manager Brendan Rodgers has claimed that he has the full backing of the board after showdown talks with owners Fenway Sports Group, but still fears he could be in for the sack if things don’t start looking up, reports the Daily Mirror.

The 42-year-old has come under fire recently after losing 2-1 to Aston Villa in the FA Cup semi-finals. The Reds also look unlikely to get in to the Premier League top four and qualify for next season’s Champions League. The team are currently seven points off fourth placed Manchester City, albeit with a game in hand.

The Northern Irishman was given a new four year deal with the club in the summer, after being voted Premier League manager of the year last season. It seems that the club hierarchy are keen to stick with him for now, but Rodgers admitted that he may be sacked in the future.

He said: “I spoke with the owners this week and they were very clear with where we’re at. Our relationship is fantastic. They’re as disappointed as we all are when we lose games but they understand the model that’s in place here. Both myself and the owners have always been in it for the long term and that remains the case.

He added later on: “Listen, that (the sack) may come at some stage. I’m not sat here in a beautiful red comfy chair
thinking I’m going to be here forever. That’s not the case.”

The Merseyside club may need several major acquisitions in the next transfer window, with captain Steven Gerrard already confirming that he is leaving Anfield. Other players could also depart without the draw of Champions League football to keep them there.