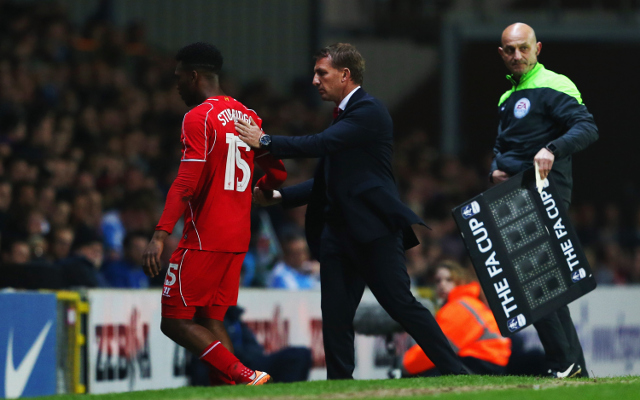 Liverpool manager Brendan Rodgers admits he is on the lookout for a new signing upfront this summer as he casts doubt over the future of Daniel Sturridge at Anfield.

The England international has performed superbly since making the move to Liverpool from Chelsea in 2013, but has also seen his progress hampered by repeated injury problems, leaving the club without options upfront this season.

Liverpool’s cause has not been helped by the departure of Luis Suarez to Barcelona, as well as the disappointing form of summer signings Mario Balotelli and Rickie Lambert.

This looks increasingly likely to lead the Reds to try for a new signing upfront at the end of this season, which looks set to end in disappointment as the club look unlikely to get back into the Champions League after slipping out of the top four.

A new striker could make all the difference for Liverpool next season, with Rodgers quoted in the Guardian as saying: “I need one that is going to be playing and at a top level every week.

“(Sturridge)’s not fit and once he can show that consistency and fitness, you can see in his performance level that it’s a high one. But obviously he has missed a lot of the season so we need to assess it. Either way, if he’s not available, we need to have that support.”