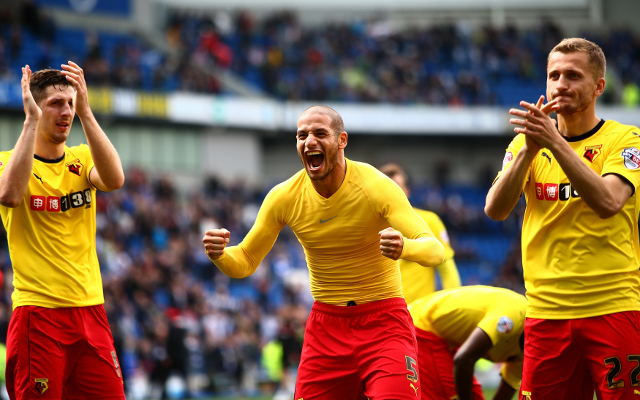 Watford won promotion to the Premier League on Saturday after beating Brighton 2-0 thanks to goals from Troy Deeney and Matej Vydra.

The Hornets weren’t promoted immediately, but had to wait and watch rivals Middlesbrough lose 4-3 to Fulham and Norwich City draw 1-1 with Rotherham to confirm that they will be playing in the top flight next season. Fellow promotion chasers Bournemouth can can also all but guarantee Premier League football if they win their next game as well.

The South East club will be especially grateful to their strikers for this achievement. Captain Troy Deeney has netted 21 times in the league, while Odion Ighalo has 20 in the second tier of English football this season. They will also have to thank manager Slavisa Jokanovic, who was only appointed in October. The Serbian has led them on an incredible run of 15 wins in their last 20 matches.

Watford fans were ecstatic on social media, but a few others were making fun of the side as well…

We’ve done it! #watfordfc are promoted to the Premier League!

WELCOME TO THE #BPL Congratulations to @watfordfcsays on promotion from the Championship. See you next season… pic.twitter.com/Lc0z0j5HvU

So much for managerial stability: Watford have had four managers since September … and are promoted to the Premier League.

Congratulations to Watford. An awful lot of hard work has gone into that..I suspect they might go for it in the Premier League

Watford’s Premier League promotion is worth over $150 million in TV money & other revenue. pic.twitter.com/mQrWPURuj9

Well boys, thank you all for your support! #godisgreat