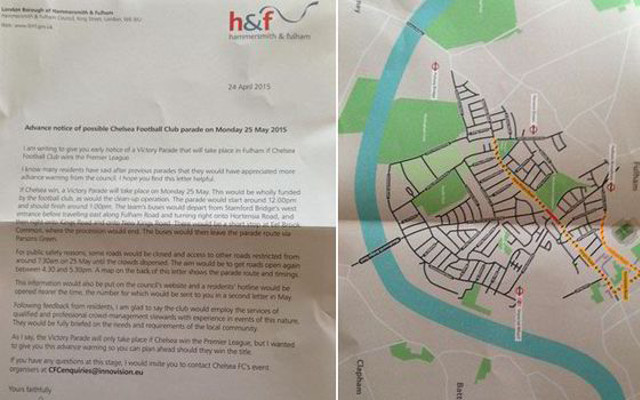 Chelsea manager Jose Mourinho may remain coy over his club’s Premier League title hopes, but according to a letter from Hammersmith and Fulham Council, the Blues have already begun planning their celebrations with a victory parade around the area.

The notice was delivered to residents who lived in the same area as Chelsea’s home ground Stamford Bridge and laid out plans for the west London club to celebrate their prospective league title, including a proposed route.

One unhappy resident, Mitch Kinney, posted a picture of the letter which explained what would happen should Jose Mourinho’s men lift the trophy, though he hoped they now didn’t.

The Blues look odds on to lift the trophy come the end of the season and could even have it wrapped up by midweek, should they win their next two games – though if they don’t, it would surely only be delaying the inevitable.

The letter, which could give Arsenal and other Premier League sides a spur of encouragement, reads, “I am writing to give you early notice of a Victory Parade that will take place in Fulham if Chelsea Football Club wins the Premier League.

“If Chelsea win, a Victory Parade will take place on Monday, May 25. This would be wholly funded by the football club, as would the clean-up operation. The parade would start around 12pm and should finish around 1pm.

“The team’s buses would depart from Stamford Bridge’s west entrance before travelling east along Fulham Road and turning right onto Hortensia Road, and then right onto King’s Road.

“There would be short stop at Eel Brook Common, where the procession would end. The buses would then leave the parade route via Parsons Green.

“As I say, the Victory Parade will only take place if Chelsea win the Premier League, but I wanted to give you this advance warning so you can plan ahead should they win the title.”

This just came through our door warning us of a Victory Parade if Chelsea win. I really hope they don’t. pic.twitter.com/RZR3oyGaL9