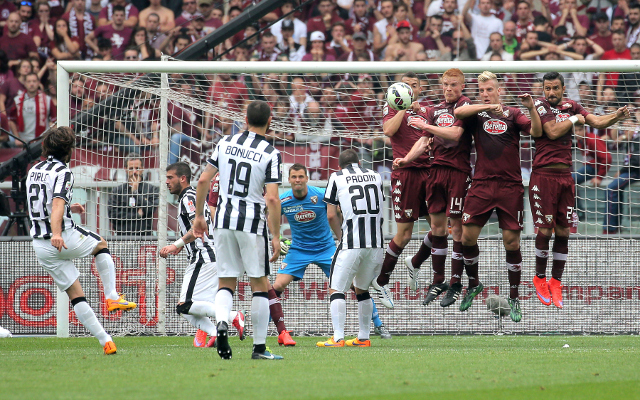 Juventus went into their game with city-rivals Torino knowing that if results went their way, they could clinch their fourth straight Scudetto. The potentially big occasion required a moment of quality, and from Andrea Pirlo, it certainly got that.

After a quiet first half lacking in chances – apart from a wasted effort from Alessandro Matri, which was set up by an exquisite pass from the Italian great – it looked as if neither keeper would be troubled before the interval.

However, ten minutes before the break, the away side were awarded a free-kick around 25 yards out. Pirlo territory. It looked as if it may be both too straight, and too close to be able to take the wall out of the equation, and subsequently get the ball on target. But, the 35-year-old hit an absolutely sumptuous effort, that got over the wall, before kissing the crossbar and bouncing over the line.

He would almost work his magic once again in the second-half, but his effort from 35 yards hit the outside of the post.

Cristiano Ronaldo set for Juventus exit this summer after huge decision from Andrea Pirlo May 23, 2021 19:25
Juventus