Toluca beat Club Tijuana 2-0 in Week 15 of the Liga MX on Sunday afternoon thanks to goals from Wilder Guisao and Lucas Lobos in either half. The result means former league leader’s Tijuana are now winless in five games.

Ahead of the game, four sides were tied on 25 points at the top of the table (Veracruz, Tigres UANL, Chivas, and Atlas) and just five points separated those four from fourteenth-place Chiapas. It meant that Tijuana, who had failed to win any of their previous four games, could return to top spot with a win. Toluca started in eleventh with twenty points, and knew a win would put them back amongst the top eight post-season play-off places with only two regular season games remaining.

Toluca made two changes from the side that drew 1-1 with Club Leon in Week 14, as Jeronimo Amione replaced Raul Nava in attack and Oscar Rojas made way for Carlos Esquivel in midfield. Tijuana also made a change from their 1-1 draw with Chivas, as top scorer Juan Arango returned from his suspension, forcing American youngster Joe Corona to settle for a place on the bench.

The hosts looked the most dangerous from the start, and their early pressure paid dividends after just six minutes when Colombian midfielder Wilder Guisao put them 1-0 up. The 23 year old only joined Toluca in the January transfer window, and although he has struggled for a place in the starting eleven, he’s now scored three league goals this season.

No more goals were scored for more than eighty minutes of play, but the game was an enjoyable, hard-fought spectacle. The two sides were well-matched throughout, with Toluca ending with 51 percent of the possession to Tijuana’s 49 percent, and also marginally out-shooting their opponents by 17 efforts to 16. Both sides had six shots on target.

The second goal came from former Tigres UANL legend Lucas Lobos. The 33 year old left the Monterrey-based side under a cloud at the end of last season, but has proved his worth to his new side throughout the current campaign.

He came on in the 49th minute to replace Guisao, who had picked up a knock, and caused problems for Tijuana’s defence throughout the second half.

His goal came in the 88th minute – though there was a element of good fortune to the strike after replays suggested his shot from a tight angle should have been easily saved by Tijuana ‘keeper Cirilo Saucedo.

The result means Toluca move up to sixth spot with 23 points – only two behind the league leaders. Tijuana, who led the table for the first ten weeks of the season, are now fifth having lost four of their last five. If their current form doesn’t improve they are in serious danger of missing out on the post season.

Next up for Toluca is a difficult trip to the Azteca to face Club America before an equally tough home game against Tigres to conclude their regular season. Tijuana host Atlas in Week 16 before a trip to lowly Club Leon on the final day of the campaign. 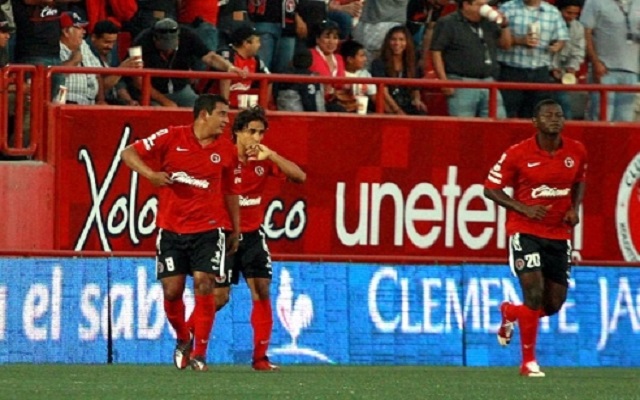