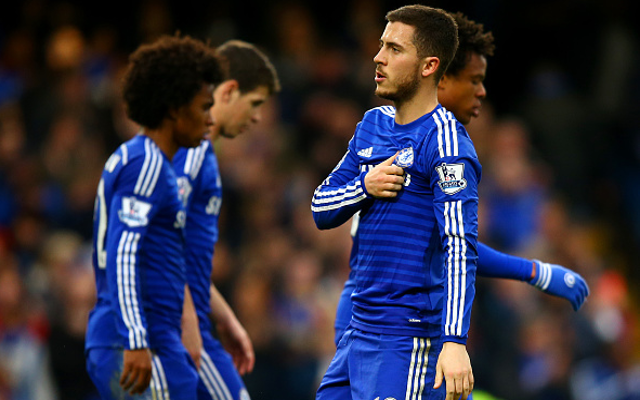 Belgian has no intention of leaving Stamford Bridge anytime soon.

Newly crowned PFA Player of the Year Eden Hazard has rejected the possibility of joining Chelsea according to Goal.com.

The 24 year old Belgian has been pivotal to Chelsea’s charge for a first Premier League title since 2010 and was duly named the player of the season by his fellow professionals and when asked about a possible move to the Bernabeu the Blues star could not have been more definitive.

“No, I’m staying [at Chelsea].” stated the former Lille man.

Hazard has matured into a hugely effective performer over the course of his three seasons at Stamford Bridge and one can well see why Mourinho would look to ward off interest in the creative attacker.

When the likes of Cesc Fabregas and Oscar have experienced inevitable downturns in form, with both players having patchy periods, Hazard has been consistent throughout.

Chelsea paid £32m for Hazard back in the summer of 2012 and since that time the pint-sized wide-man has racked up 36 goals and 26 assists in Premier League action alone.