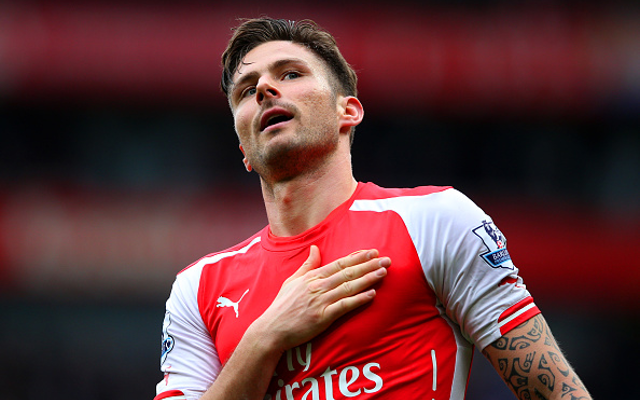 Almost by default now, Olivier Giroud becomes Arsenal’s scapegoat if they fail to win a big game, as he has become once again after this weekend’s 0-0 draw with Chelsea.

Gunners legend Thierry Henry lead the pleas for manager Arsene Wenger to bring in a world class striker to replace the Frenchman, despite his impressive tally of 17 goals in just 24 games this season. The defeat to AS Monaco was the same – despite the defence messing up on each of the goals the visitors scored that night, it was a number of misses by Giroud that got all the attention; and yet, in between these two fixtures, the 28-year-old has rightly been hailed as one of the stars of the side.

Still, there is also a strange acceptance that Giroud might be a decent striker, but not one good enough to decide these big games. Evidence suggests that he’s pretty much on a par with other big names at the leading clubs in the Premier League, however, scoring four times against the traditional ‘big six’ sides this season (five if you include his wondergoal in the Community Shield win over Manchester City). Yes, he might have his best games against teams like Crystal Palace, Queens Park Rangers and West Ham United, but this season Giroud can also boast strikes home and away against Liverpool, away to Manchester City, and at home to Manchester United – only the latter was a defeat. In previous seasons, the former Montpellier man has also found the back of the net against Liverpool and Tottenham Hotspur, plus big names like Bayern Munich, Borussia Dortmund and Napoli in the Champions League.

In contrast, champions-elect Chelsea, only have three goals in the big games from their £32m summer signing Diego Costa, one of which came in the 5-3 defeat to Spurs. Manchester United’s Wayne Rooney, one of the biggest-name strikers of all, has the same total in games against the big six this term. Tottenham star Harry Kane is not doing a whole lot better, with five. Leading the way, in fact, is Manchester City’s Sergio Aguero, with nine; and yet look where his team are this season, with his two goals in a 4-2 defeat to United not doing a whole lot of good to change the outcome of a big game.

How about last season? The best striker in the Premier League by some way, Liverpool’s Luis Suarez, scored only four times against the big six, one of which was against the worst Manchester United team in decades and that didn’t stop the Reds launching a challenge right until the last day. Aguero, of champions City, did better with seven, though one came in a defeat to Chelsea and three in both routs against Spurs – how much of a difference did they really make?

It is easy to spout cliches about what it takes to win the Premier League title, and having a top class striker and winning the big games are two of the most common ones, but recent history suggests there’s not a lot to that thought.