AFC Bournemouth are on the cusp of promotion to the Barclays Premier League following an emphatic 3-0 victory against Bolton Wanderers at the Goldsands Stadium on Monday night and those on social media have congratulated the team.

After Middlesbrough lost 4-3 at the weekend to Fulham at Craven Cottage, the Cherries went into the game against the Trotters knowing that a win would all but seal a place in England’s top tier next season.

In typical fashion they cruised to a comfortable victory thanks to goals from Marc Pugh, Matt Ritchie and Callum Wilson, even a missed second half penalty from Yann Kermorgant could not spoil the celebrations that followed at the final whistle as fans spilled onto the pitch. 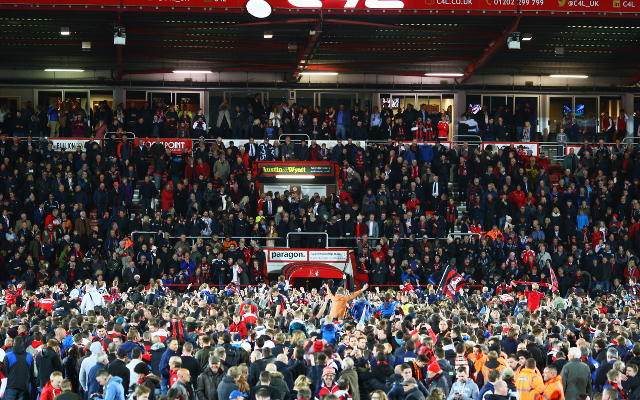 It would take an highly unlikely 19 goal swing against Charlton on Saturday to prevent Eddie Howe’s side from going up and they could clinch the Championship title if they better Watford’s result against Sheffield Wednesday.

Who would have thought it Bournemouth in the prem. Unbeleivable achievement ????????

Not even a hint of the occasion getting to Bournemouth….just work ethic and quality. — Vinny O’Connor (@VinnOConnor) April 27, 2015

Congrats to Bournemouth been brilliant all season fully deserve that

Congrats to Bournemouth been brilliant all season fully deserve that