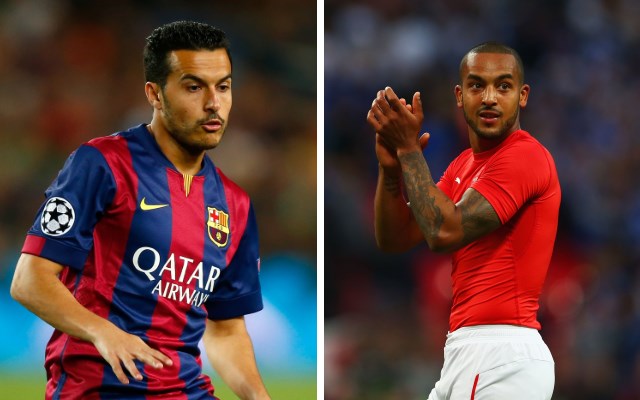 Arsenal are rumoured to be planning a summer swoop for Barcelona forward Pedro, with the Gunners potentially lining him up as a replacement for Theo Walcott.

READ MORE:
Arsenal news
Thirteen coolest footballers on the planet, with Arsenal star and Liverpool flop
Liverpool could sign Pedro if they lose Sterling this summer

According to Mercato365, Arsene Wenger is anticipating the eventual departure of Walcott, with the England international—who has had a troubled few seasons at the Emirates Stadium—reportedly targeted by both Manchester City and Liverpool.

Wenger is interested in 27-year-old Pedro, the World Cup winner who remains unable to nail down a starting spot in Barcelona’s first XI. Liverpool have also been linked to the player.

Would the Spanish international be an upgrade on 26-year-old Walcott—who has so often flattered to deceive in North London?

Comparing the two players’ stats this season, it’s important to note that Pedro—despite making only 13 starts—has featured in 30 Liga BBVA matches for Barcelona. Walcott, with injury stymieing his progress, has managed only nine appearances this term.

Impressively, Walcott’s goal ratio of one every 154 minutes, it better than Pedro’s. The Spain forward may have scored five to Walcott’s two, but he has taken 258 minutes between goals.

However, while Walcott’s ball control—he has been dispossessed only 0.4 times per match, and averaged 0.4 poor touch poor game—is better than Pedro’s [according to WhoScored], the Barca man’s all-round game is arguably more impressive.

Over to you, Arsene…