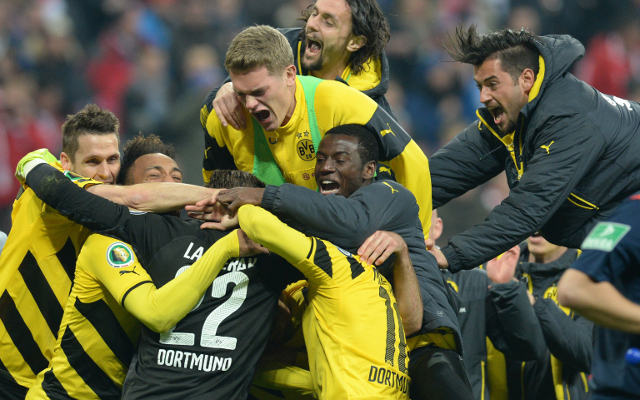 Bayern Munich suffered a shock loss to Borussia Dortmund in the semi-final of the DFB-Pokal, with the holders going out on penalties after the teams proved inseparable during normal time.

It looked set to be a simple and routine win for the Bundesliga leaders, with Pep Guardiola’s side dominating the game in the first half.

Dortmund didn’t seem to have turned up, and Bayern looked confident in possession. It seemed only a matter of time before they took the lead, and it was a familiar face that finally broke the deadlock.

Some poor defending played former Dortmund man Robert Lewandowski onside, with reserve goalkeeper Mitchell Langerak the only thing standing between him and the goal. The Pole hit the post however, and the chance looked to have gone begging.

Sokratis Papastathopoulos bizarrely seemed to switch off though, and all but turned his back on the game. Lewandowski slotted it into the back of the net from a tight angle, giving his side a deserved 1-0 lead.

Dortmund never really looked like getting back into the game, and Bayern looked the most likely to score the second goal.

A shock injury to second half substitute Arjen Robben seemed to rock them however, and Jurgen Klopp’s men suddenly came to life. Out of nowhere Dortmund snatched a goal, Pierre-Emerick Aubameyang slamming the ball in from an impossible angle.

Manuel Neuer was adamant that he had kept the ball from crossing the line, but replays showed that it was the correct decision to let the goal stand.

The teams remained level all through normal time, with extra time awaiting them.

Dortmund put themselves in trouble when substitute Kevin Kampl got himself sent off for a reckless challenge and a second bookable offense, and it looked as though Bayern were going to capitalise.

Lewandowski came close to doubling his tally when he got his head on a fantastic ball into the box, but he was clattered by Langerak – a challenge the referee deemed fair.

The Bayern striker didn’t look right for the rest of the game, but with no substitutes remaining he was left to carry on.

The game eventually went to penalties, with Bayern stepping up first. Things immediately went wrong for them however, with both Philipp Lahm and Xabi Alonso slipping – blasting their shots high and wide.

Dortmund scored their first two, while Bayern missed their third. Mats Hummels had the chance end it, but a fantastic save from Neuer kept him out. The shot-stopper stepped up to take the fourth – and what proved to be the final – penalty. The German national went for power, but saw his shot smash against the crossbar.

Bayern’s hope of the treble are now gone, but Klopp could now leave Dortmund with a bang with a win in the final against either Wolfsburg or Arminia.