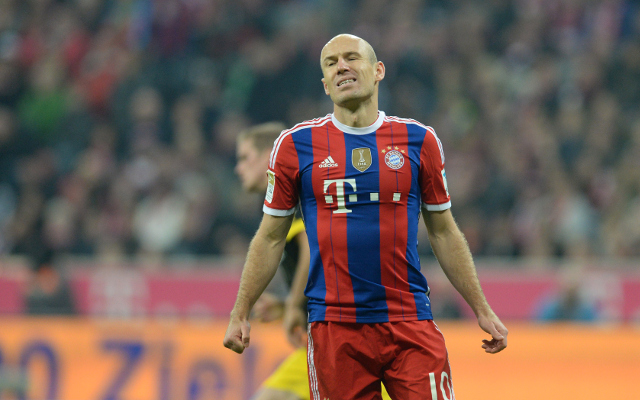 Bayern Munich attacker Arjen Robben has been ruled out for the rest of the season, as his club’s injury crisis goes from bad to worse.

The former Chelsea winger tore a muscle in his left calf in the German Cup semi-final clash with rivals Borussia Dortmund and is not expected to return before the end of the campaign.

It gives his side a major disadvantage going into the Champions League semi-final showdown with in-form La Liga leaders Barcelona, reports Marca.

Holland international Robben, whose trophy-laden career has been frequently interrupted by muscle injuries, is an integral part of Pep Guardiola’s team and would have played a pivotal role against the manager’s former club Barca.

However, he has become one of a number of first-team regulars to be restricted to the treatment table, including Holger Badstuber, Franck Ribery, Robert Lewandowski and David Alaba.

Badstuber in particular has a serious injury, and his thigh problem is expected to keep him out of action for up to four months, meaning he could miss the start of next season.

Bayern were crowned Bundesliga champions for the 25th time at the weekend.