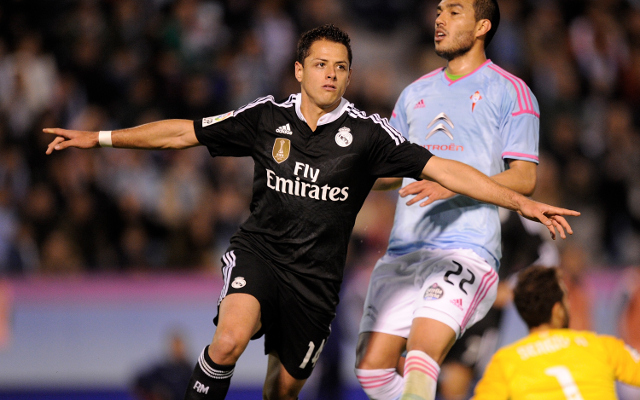 Real Madrid must make a decision on whether they’d like to sign on-loan striker Javier Hernandez on a permanent deal from Manchester United in the next 48 hours – before their first option to buy expires on Friday.

READ MORE:
Javier Hernandez: God only knows if I’ll be at Man United next season

The Spanish giants have just two days remaining to make a decision before Manchester United will listen to offers around £10m from other clubs, the Daily Mail report.

Friday 30 April was the date agreed in the season-long loan deal that Real’s ‘exclusivity period’ on making a permanent offer for the striker would expire, leaving the La Liga giants just hours to secure his signature – if desired.

The Mexico international has burst into life in recent weeks – scoring the winner in the 88th minute against arch rivals Atletico Madrid in the Champions League quarter-final, and following the goal with a double four days later away to Celta Vigo.

It seemed that Chicharito would be returning to Old Trafford with an extremely uncertain future having spent much of the season on the sidelines, but his recent goalscoring form could tempt Carlo Ancelotti into making a purchase.

Carlo Ancelotti, however, is in no rush to make a decision on the 26-year-old’s future at the Santiago Bernabeu: “It is a subject that we will evaluate at the end of the season,” the Italian revealed.

“What I can say is that I have liked his professionalism during the whole year. He is enjoying his opportunity a lot, he has a high level of professionalism and for a coach to have these type of players that are always ready is very positive.”

According to the reports, West Ham United, Southampton and Lazio are readying offers around the £10m desired from Old Trafford chiefs.