Brazilian midfielder Nathan has confirmed that he is in London to have a medical after agreeing terms with Chelsea, reports the Metro.

The 19-year-old also confirmed that he had been speaking to several Blues players including Eden Hazard, Willian, Oscar, and Diego Costa. With this news it is looking more and more likely that the youngster will be joining the Stamford Bridge outfit in the near future, as long as nothing untoward is found during his medical.

This first tweet translates to: “Very happy!!! In London to sign my contract with Chelsea and take tests.” 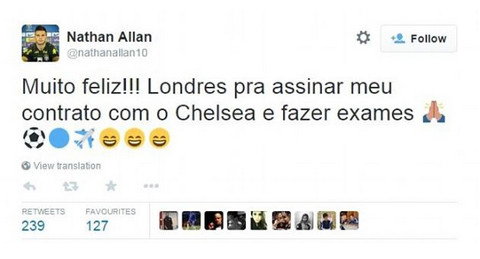 While the second says: “I had the good fortune to chat with the monster Hazard, Oscar, Willian, Felipe, and Diego Costa today.. More superstars.”

The midfielder is still contracted to Atletico Paranaense and there has been no confirmation from Chelsea or Jose Mourinho that a deal is in place. Nathan has played 14 times for the Brazil Under 20’s, scoring three times. This is actually more than the teenager has played for his club, where he has only appeared 11 times and never completed a full 90 minutes.

With players such as Cesc Fabregas, Nemanja Matic, and Oscar already occupying the middle of the park for the Blues, it is doubtful whether they even need to add the South American to their roster.