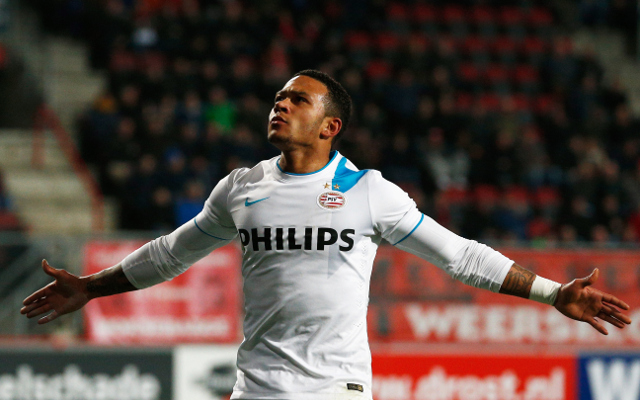 There are conflicting reports over the future of PSV Eindhoven forward Memphis Depay, but a Premier League move still appears the most likely outcome.

Goal.com name Manchester United and Liverpool as the Netherlands international’s most likely destinations, and offer quotes from former PSV, Tottenham and Chelsea sporting director Frank Arnesen to back up the claim.

“For me, it’s 99.9 per cent [that Depay will move to the Premier League],” said Arnesen, but offered no further insight on the expected outcome.

The local Dutch press had more to reveal.

Eindhovens Dagblad reporter Rik Elfrink said on Twitter that no club is yet close to signing Depay, despite strong links to Liverpool in recent weeks.

That translates as ‘PSV are delaying any decision on Memphis Depay’s transfer with more updates to come (perhaps soon). There is no agreement with Liverpool, despite reports in the British tabloid press.

Footballers can send fans and media into a frenzy on social media, and that certainly proved the case earlier this week – Depay hit the Like button on a post to his Facebook profile page which stated ‘Welcome to Liverpool’, which caused something of a storm on Merseyside. 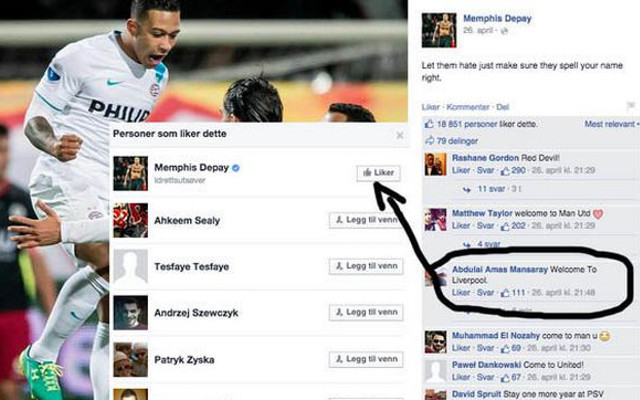 Whether that represents a hint or not remains dubious, but Depay’s talent is not in question.

21 goals in 28 Eredivisie appearances from the left wing is certainly an impressive tally, and that total makes him the top scorer in the Netherlands. The power and technique of his shot is remarkable, and seven of his goals have come from outside the area – again, the most in the Dutch top flight.

Depay’s had more shots than anyone in the Eredivisie too, with 46% of those on target despite more than half being from outside the area.

Liverpool have struggled for goals this season, with Daniel Sturridge and Luis Suarez having combined for 52 Premier League goals last term. Suarez was sold to FC Barcelona in the summer, while Sturridge has struggled with injury throughout the campaign, meaning that Raheem Sterling is the Reds’ top scorer with just seven.

At Manchester United, Ashley Young has been excellent on the left under Louis Van Gaal, but will turn 30 in the summer, and Depay could be an excellent replacement.

The form of a player like Young could allow Depay to adapt over a greater period of time, and the fact that his former manager with the Netherlands is in charge at Old Trafford could well appeal too. At Liverpool, he would be a more surefire first team addition, but might well thrive on the responsibility.

“At some point, it becomes clear that [Depay] is ready for the next step,” PSV boss Philip Cocu was quoted as saying by the Daily Mirror in February. “And yes, I think he’s going to leave PSV after this season.”

Memphis Depay has a big decision on his hands this summer.