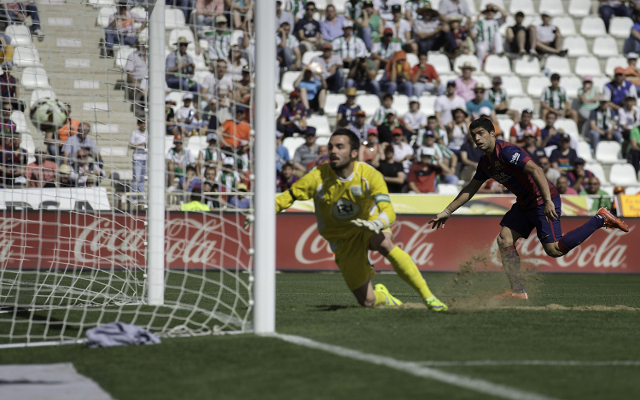 Barcelona warmed up for their Champions League semi-final against Bayern Munich with a convincing win over La Liga strugglers Cordoba.

Luis Enrique’s side could have been forgiven for having their minds on the mid-week encounter with their former boss, Pep Guardiola, but unfortunately for Cordoba the table topping Catalan giants had no intention of taking their collective feed off the gas.

Ivan Rakitic finished emphatically to being the rout.

Luis Suarez continued his run of fine form with a tidy finish.

Two minutes into the second half and Lionel Messi ended the game as a contest, netting a rare header from a fine Dani Alves cross.

On 53 minutes Luis Suarez fired in his second and Barcelona’s fourth.

With 25 minutes to play Gerard Pique rose highest in the box to neatly head in Barca’s fifth.

Shortly after Lionel Messi stole in ahead of Neymar to finish from one yard to make it 6-0 to the visitors, by this point Cordoba has been destroyed mentally.

Neymar was felled in the box and Messi handed penalty taking duties to the Brazilian and he netted to make it 7-0.

With time running out a Xavi shot deflected into Luis Suarez’s path and he calmly stroked home to complete his hat-trick.