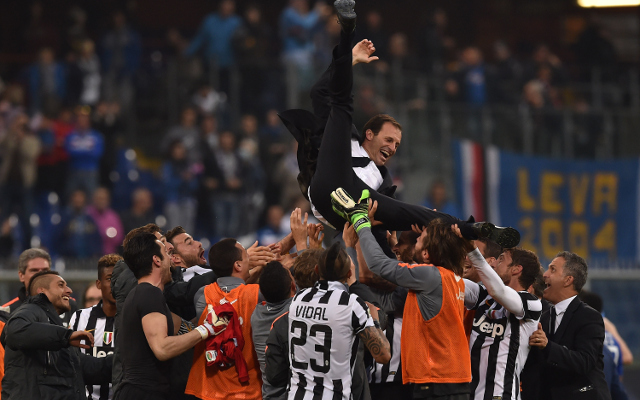 Juventus finally confirmed the inevitable as an Arturo Vidal goal gave them a narrow victory against Sampdoria, and more importantly the point they required to clinch their fourth consecutive Serie A title.

With five games to go, their 16 point lead over second-placed Lazio meant that a draw would have been enough to claim another Scudetto. However, their opponents had not been beaten at Stadio Luigi Ferraris yet this season.

And whilst Sampdoria enjoyed much of the play throughout the game, it was the Old Lady that took the lead just after the half-hour mark. A cross towards the back-post found the Chilean midfielder, who was unfazed by the acute angle, and found the inside of the net.

The rest of the game was something of a procession for the side that have become the second team – after Bayern Munich – to seal one of the five major league titles across Europe.

With the league in the bag, Massimiliano Allegri will now be looking to take that winning feeling forward with both the Coppa Italia final and Champions League semi-final on the horizon.

And here is the moment they confirmed the first part of what could become a historic treble: