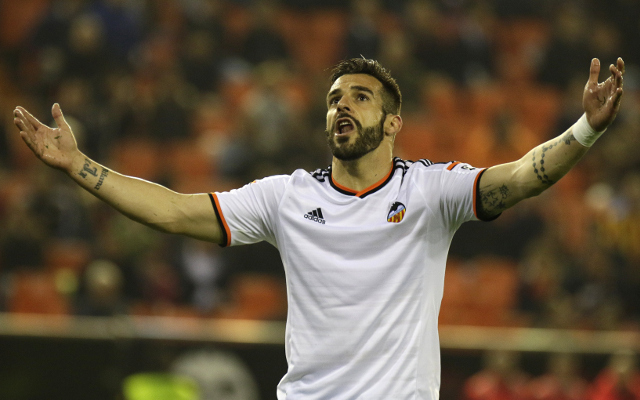 Manchester City striker Alvaro Negredo has given an exclusive interview detailing the breakdown in his relationship with manager Manuel Pellegrini before leaving the club on loan for Valencia last summer.

The Spanish international, who had made a superb start to life at the Etihad Stadium last season, ended on a real low note despite picking up a Premier League winners’ medal at the end of the campaign.

Negredo has now explained that he felt a big reason behind his drop in form was playing through a shoulder injury, and keeping himself in the team due to injuries to other strikers putting him under pressure.

The 29-year-old has not had the best of times back in La Liga this term, but still looks likely to make a permanent move to the Mestalla, with the Daily Mail reporting that they are keen to activate their clause to sign him at the end of his loan spell.

“The main reason I left is because the manager lost faith in me,” he said.

“Around February, I had an injury to my shoulder. I didn’t stop to rest it. I was playing in a huge amount of pain. Kun (Aguero) was injured and Stevan Jovetic had problems, so I felt I had to play.

“We had huge games against Chelsea and Barcelona. I didn’t play well and the manager started to play Edin Dzeko. I don’t feel I ever regained his trust.

“I began to lose my confidence but I didn’t give up. I trained harder than ever and tried to show Pellegrini I deserved to play. In the end, though, when you do all that and you still don’t get a game, it’s difficult. I need to play for a manager who wants me.”

Negredo added that he has followed City this season and thinks they have lacked a fourth striker, hinting that they have missed him at the Etihad Stadium.

“I have watched nearly every City game this season that hasn’t clashed with ours. Their level has dropped and they are fighting for third. They have been short of a striker. They probably need a fourth one,” he added.