Chelsea have been crowned Premier League champions after beating Crystal Palace 1-0 in the London derby at Stamford Bridge on Sunday afternoon thanks to a solitary goal from their player of the season Eden Hazard.

PFA Player of the Year Hazard broke the deadlock a few minutes before the end of the first half as he won a contentious penalty and scored from the rebound after Julian Speroni has saved his spot-kick, but the Belgian was first to react and headed the ball into the corner of the net. 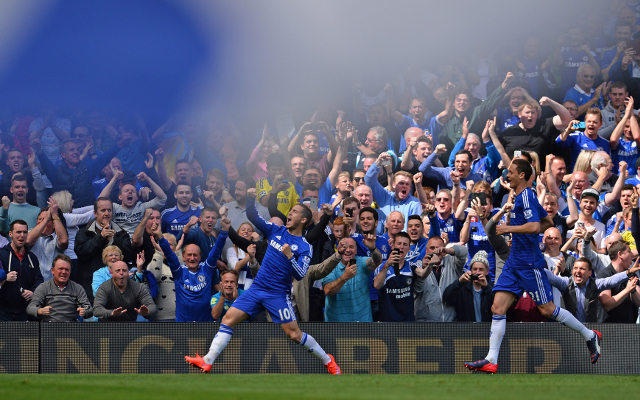 With the Blues just needing one win to become champions for the first time since 2010, they suffered a blow as Ramires was ruled out prior to kick-off because of illness and that meant a start for January signing Juan Cuadrado.

The first real talking point of the game came midway through the first half when Blues captain John Terry appeared to block an Jason Puncheon effort with his arm but claims for a penalty were dismissed.

Alan Pardew, who had not lost a game against Jose Mourinho prior to this meeting, would have been pleased with how his side began the game with Wilifried Zaha in particular proving to be a constant threat down the left hand side.

But minutes before the interval came the breakthrough for the Blues in a moment of controversy as Hazard was adjudged to have been fouled in the area by the combination of Adrian Mariappa and James McCarthur and the hosts were awarded a spot-kick.

The Belgian dusted himself down to take the penalty but he was denied from 12 yards for the first time in his Premier League career but was able to spare his blushes by converting from the rebound.

Chelsea negotiated the second half with relative ease and could have added to their lead through Didier Drogba and Willian but the day will go down as a special one for all connected with the West London outfit as they clinched their first league title in five seasons.