As Chelsea won their fourth Premier League title in 10 years, former captain and assistant manager Ray Wilkins picked an ultimate starting XI including players to have played for the West London outfit between 2005 and the present day.

Check out Wilkins’ side below which includes a shock place for Willian ahead of former midfielders that would have been worth a place in the team such as Michael Essien, Michael Ballack and Juan Mata but the Blues legend explained his decision to pick the Brazilian international: 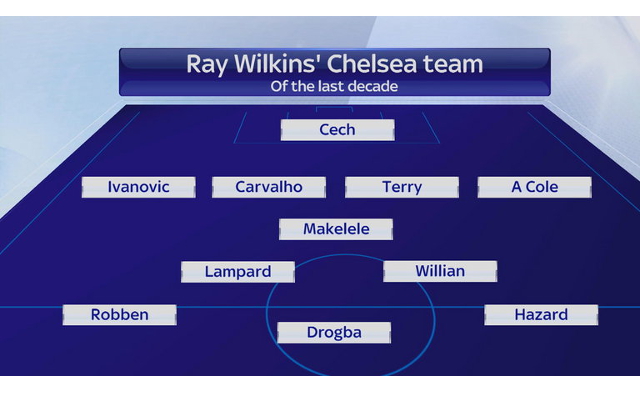 “I love Willian, I think he has been an absolute delight this year. What he gives you is he transforms defence into attack in the blink of an eye and he’s gone. He is a super footballer and has a magnificent work ethic and I think that is what Mourinho likes in his players.” he told Sky Sports.

After a 1-0 win over Crystal Palace at Stamford Bridge on Sunday afternoon, the Blues were able to celebrate being crowned champions of England in front of their home fans and the occasion marked exactly a decade since they achievement the feat for the first time in over 50 years.

In winning the league again, Chelsea are set to become the competitions most dominant champions as they have remained top of the table for the duration of the campaign meaning they will beat Manchester United’s record of 262 days set in the 1993/1994 season.