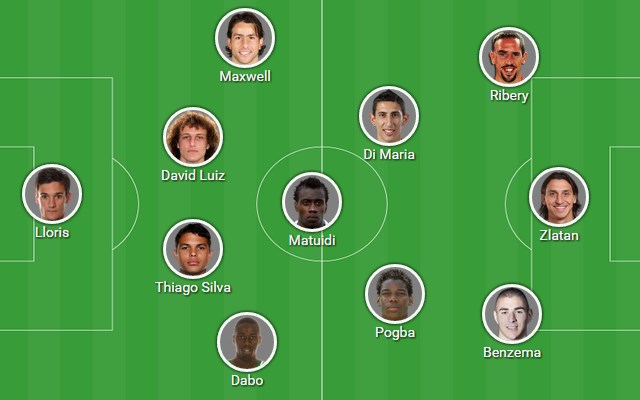 Thiago Silva has named his dream team, choosing a marvellous collection of teammates and opponents.

Speaking to Sport, the current Brazil and Paris Saint-Germain skipper has picked his perfect starting XI—choosing a formidable side made up of current players.

Naturally, both the defender’s compatriots from the Selecao and his teammates from Paris figure prominently, but there is also a place for some rivals who have never played alongside the former Milan man.

Surprisingly, perhaps, for a centre-back, Silva’s side is incredibly attacking—you suspect he’d much rather be playing with this side than against it!

Silva picks himself in defence, alongside buddy David Luiz in the heart of the backline. The defensive five is completed by Maxwell on the left and…oddly…Mahamadou Dabo of Olympique Lyonnais on the right.

This leaves no place for Dani Alves, Silva’s national teammate and PSG target.

Instead, it features Zlatan Ibrahimovic, flanked by Karim Benzema and Frank Ribery.

Even without Ronaldo, Neymar and Messi, that front three could certainly do some damage!