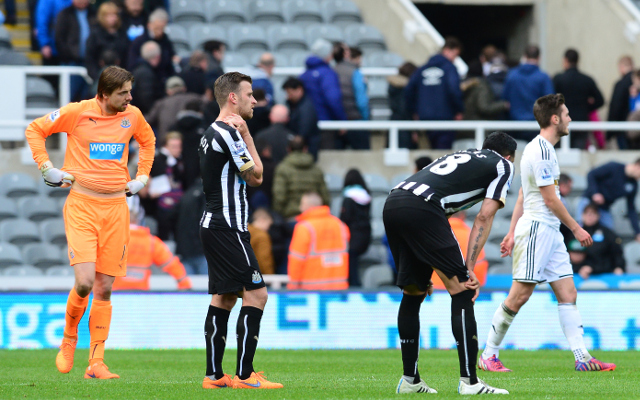 The discontent surrounding Newcastle United has made St James’ Park something of a cauldron of hostility all season, but the alarming slide of John Carver’s men has taken their concerns to another level.

Protests have overshadowed much of their season, with firstly, Alan Pardew facing the brunt of the blame, before his departure to Crystal Palace in December saw the anger shift back to the owner Mike Ashley.

Saturday’s performance against Leicester was appalling for the club both on and off the pitch. The game was lost 3-0, with two red cards for Newcastle, and Carver was furious – even suggesting that defender Mike Williamson got sent off on purpose. It was their eighth successive defeat, and now relegation – which had not been a concern when Pardew jumped ship – is now staring the Magpies square in the face.

The boiling point has now been reached, and is now at a stage which, according to the Daily Telegraph, has persuaded the heavily-criticised players to tell their families to stay away from home games over fears for their safety.

If Newcastle manage to drag themselves out of the battle to beat the drop, then it may provide temporary relief for the desperate fans, who wish to see their side back in the higher echelons of the top flight. But the nightmare will just be resetting itself, ready for another campaign with foolish optimism, but ultimately, disappointment.

The Newcastle ship is sinking. Unless something changes soon, is just when it plummets that is the question, not if.