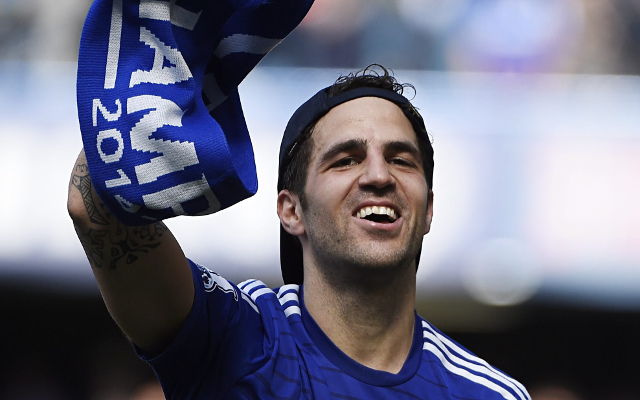 Chelsea playmaker Cesc Fabregas has revealed that he feels relieved to have finally won a Premier League title having played in England for so many seasons during his career, but, previously, with little fortune.

Despite spending eight seasons at Arsenal, the Spaniard never got his hands on the big trophy – winning just one major trophy – the FA Cup.

READ MORE:
Chelsea transfer gossip
Cesc Fabregas says one of his managers has something ‘special’ over all of the others…sorry Arsene, it’s not you!

His return to the capital in the summer with the Gunners’ London rivals Chelsea shocked England’s top flight, and he cited, in quotes by the Daily Express, “unfinished business” as the reason behind his return.

“It’s a fantastic feeling to win the Premier League,” he added.

“It’s also a relief. I have been waiting for it for a long time,” he continued.

“I have been in this league for many years now and to win this trophy means a lot.

“To do it at home is very important as well. I think we are all proud and we cannot wait for next season now.”

In his time at Arsenal, Fabregas won only the FA Cup and the FA Community Shield, and left seeking trophies with his boyhood club Barcelona – in which he achieved just that in the three seasons spent at the Camp Nou – triumphing in six competitions with the Spanish giants.

However, after failing to cement a regular place in the Barca line-up, the Spain international made a sensational return to London in the summer – breaking the hearts of Gunners supporters – as he joined Arsenal’s London rivals Chelsea.

His 17 league assists helped the Blues to their first title in five seasons, and having now won all available medals in England – as he also won the Capital One Cup in his first campaign at Stamford Bridge – his next target will be the Champions League.