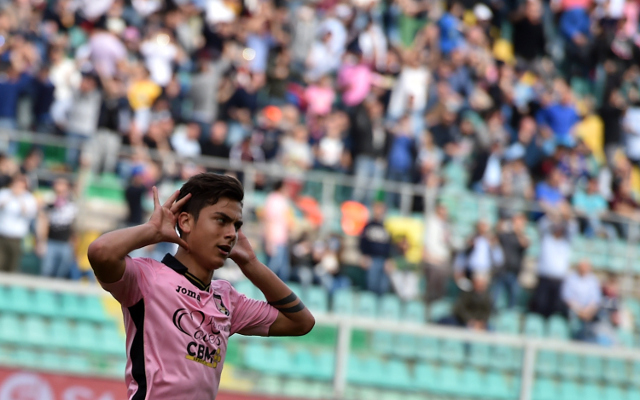 Palermo president Maurizio Zamparini has revealed that the future of Arsenal and Chelsea target Paulo Dybala will be decided within the next couple of weeks.

The 21-year-old has also been linked to Juventus, Paris Saint-Germain and Manchester United.

The striker has netted 13 goals so far this term in Serie A, and his impressive performances have caught the eye of a host of top European clubs  – who are eager to take advantage with his contract with Palermo set to expire next summer.

Zamparini said that the club will meet with Dybala and his agent within the next few weeks, and Juventus are leading the transfer chase.

“At least three teams are really interested in him. Those who understand football realise his potential,” as quoted by Sky Sports.

“I think in 10 or a maximum of 15 days we will know his future. We will meet with the player and his agent to complete the deal.”

Arsenal, Chelsea, Manchester United and Paris Saint-Germain, all linked to the Argentinian by the Daily Express, are set to be disappointed as the forward himself revealed his desire to remain in Italy.

Dybala confessed that he would love to play alongside Juventus legend Andrea Pirlo, “I love Italy. This is the country that made me famous and I would love to stay in Serie A. It’s a lot easier for a striker when you have a playmaker like Pirlo behind you. He makes even the most difficult things look easy.”