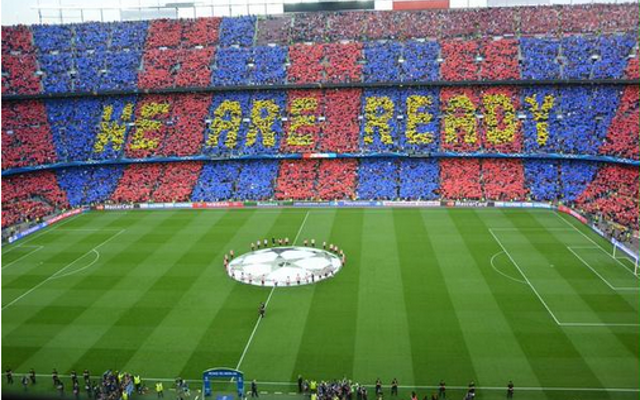 Barcelona face Bayern Munich in the Champions league on Wednesday night, and it looks like they were attempting to intimidate their semi final opponents from the start.

The Catalan club welcomed the Bavarian outfit to the Nou Camp with a massive mosaic saying ‘We Are Ready’. Either side of the motto were the years of their four Champions League victories, the fifth would allow them to keep the current trophy.

To do this the La Liga giants are likely to need a win against the Bundesliga champions in the first leg before they travel to the Allianz Arena next week. With both Arjen Robben and Franck Ribery ruled out of the fixture now would seem to be a better than most to try and beat Pep Guardiola’s team.

This is the first time that Guardiola has played against Barca since he left them three seasons ago. After he was so successful with Barcelona the fans are unlikely to give him any stick.