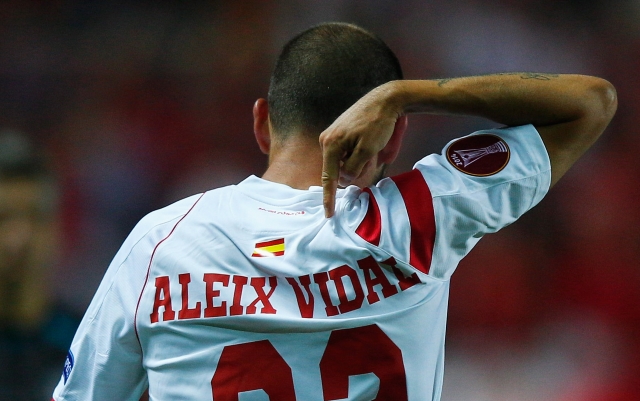 With Dani Alves linked with a move away from the Nou Camp this summer, Barcelona are believed to be lining up Sevilla’s Aleix Vidal as his replacement.

The 25-year-old Spaniard has been in fine form for the club this campaign and has been one of the breakout stars of the Europa League, where Los Rojiblancos have advanced to the semi-final.

Following a 3-0 first-leg victory over Fiorentina, they look like a good bet to return to the final of the tournament they won last year.

Vidal scored twice in that match, but is under contract until 2019—a fact which may dissuade Barca.

The Europa League final may prove to be Vidal’s last match for Sevilla.

According to Sport, Barcelona are interested in the right-back as a potential successor to Dani Alves.

The Brazil right-back has been linked with a move to Paris Saint-Germain this summer, with the club looking to replace Gregory van der Wiel, who has failed to impress this term. Similarly, while another full back at the club, Serge Aurier, has impressed sporadically, injuries and off-field concerns have affected his progress.

Manchester United are also believed to be interested in the Selecao star.