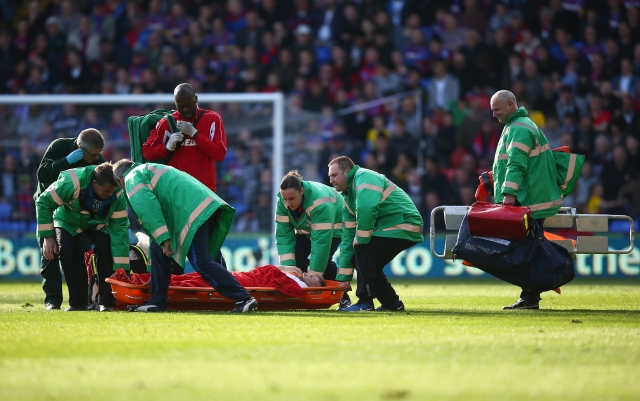 Manchester United lead Crystal Palace 1-0 at half-time, but their showing was marred by a dreadful first-half injury for Luke Shaw.

The England left-back had an innocuous collision with Yannick Bolasie towards the end of the first half which left the former Southampton man in a bad state.

At first, it was hard to tell what had happened, as contact was hard to spot, but as the Democratic Republic of Congo winger tore onwards, Shaw tumbled to the ground.

The defender was left bloodied and groggy.

After receiving treatment, he was taken from the pitch on a stretcher with a suspected broken nose, replaced by Jonny Evans, with Phil Jones being pushed out to left-back.

United went in at the break with a 1-0 lead after Juan Mata fired home from the penalty spot following as Scott Dann was adjudged to have handled in the box.

If thing stay as they are, the Red Devils will end a three-match losing streak which has seen them loosen their grip on the top four and a return to the Champions League.