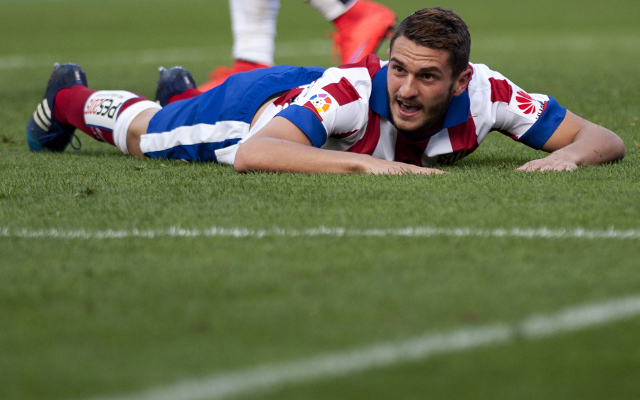 Despite having successfully securing the Premier League crown Chelsea boss Jose Mourinho has no intention of resting on his laurels, with the Daily Mirror elaborating on four apparent summer targets.

Top of the Stamford Bridge wish-list is Atletico Madrid star Koke, the 23 year old Spanish international having continued to impress in 2014/15 having proven key in his side’s La Liga title triumph last term, and Vicente Calderon boss Diego Simeone may well fear the loss of another of his top talents to the West London outfit.

Mourinho snapped up Diego Costa and Felipe Luis from the Spanish capital side last summer and the Chelsea manager will apparently offer the Brazilian left-back as part of a player plus cash deal for Koke.

Koke is said to have a £44m release clause written into his contact but Chelsea will look to keep the cost of such a move down by offering £30m plus Luis.

One wonders quite where Koke would fit into Chelsea’s current first team set-up but there is no denying the obvious talent the Atletico Madrid man possesses.

Koke finished last term as one of La Liga’s leading assist-makers and could offer Chelsea a further cutting edge in the final third.

Chelsea are also interested in strengthening their attack with a move for Inter Milan forward Mauro Icardi.

The Argentine may be considered a solid back-up option to first choice striker Diego Costa, with neither Loic Remy nor Didier Drogba proving hugely effective in the role in 2014/15.

Another Premier League based target comes in the form of QPR veteran keeper Robert Green with Mourinho expecting to lose Petr Cech at the end of the current campaign.

Finally Mourinho is tracking West Ham’s Aaron Cresswell, with the Hammers full-back presumably seen as a replacement for the aforementioned Luis, and a move for the Upton Park wide-man would of course have the added benefit of boosting Chelsea’s ‘homegrown’ contingent.

Whilst there is always a danger of a side ‘resting on its laurels’ after a title triumph there is perhaps a danger that Mourinho’s moves to bring in fresh additions will seek to undermine the host of young talents coming through the ranks.

Chelsea’s youngsters won both the FA Youth Cup and the UEFA Youth League titles this season but in recent years very few academy graduates, or indeed young signings from elsewhere (such as loaned out forward Patrick Bamford), have forced their way into the club’s senior set-up.

Given UEFA’s FFP (Financial Fair Play) guidelines and homegrown rulings it would be in Chelsea’s best interest to make a conscious effort to ‘blood’ some youth talent and offer their top teen stars the chance to forge a career at Stamford Bridge.

This term Mourinho has played little more than lip-service in this regard, offering midfielder Ruben Loftus-Cheek a single Premier League sub run out whilst the likes of Dominic Solanke and Isaiah Brown have both made the bench without racking up a minute of top tier action.

Such a move may also be beneficial to owner Roman Abramovich’s bank balance.