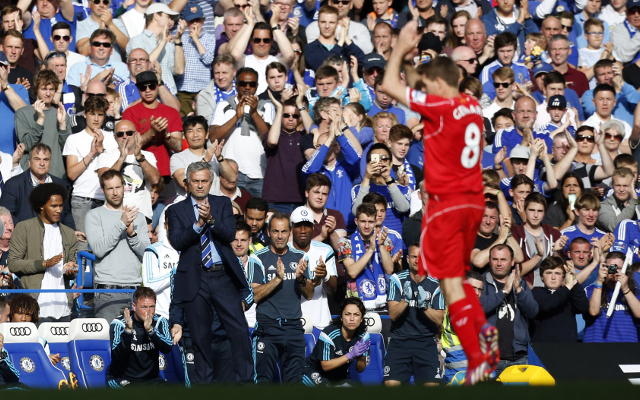 The clash ended in a 1-1 draw – which has all but ended the Reds’ hopes of pipping Manchester United to a Champions League qualifying spot, as they sit six points behind their fierce rivals in fifth.

John Terry opened the scoring with a trademark headed finish, but Gerrard stopped his side from falling to a defeat by equalising moments before half-time.

Watch the clip below as the former England skipper expresses his happiness over the ovation from his Liverpool supporters, and hilariously mocks Chelsea…

The Anfield hero also described the ‘slaughtering’ he received throughout the game from the home supporters.

Gerrard told BBC Sport, “Chelsea fans have shown me respect for a couple of seconds but slaughtered me all day. What’s important is the support from the Liverpool fans, they’ve been with me from day one.”

He also stated his respect for Chelsea boss Jose Mourinho – calling the Portuguese manager the best in the world.

“I have huge respect for him, said the Reds captain.

“He’s the best manager in the world in my opinion,” he continued.

“I would have signed for him on three occasions if I wasn’t such a big Liverpool fan.

“He’s the reason my head was turned on a couple of occasions but he knew why I couldn’t do it, because I love Liverpool Football Club. It always means more when you win for your people.”

Gerrard will make just one more Anfield appearance – versus Crystal Palace next Saturday evening – before jetting off to join his new LA Galaxy team-mates in July.