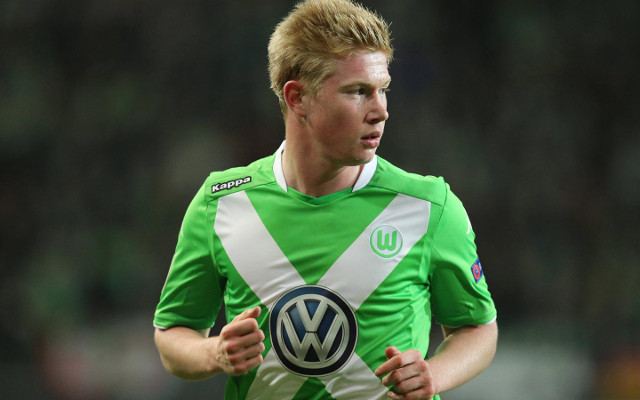 Kevin De Bruyne’s agent has confirmed that Manchester City, Bayern Munich and Paris Saint-Germain have all made contact over signing his client, but no club has yet tabled an official bid for the Vfl Wolfsburg playmaker.

Since leaving Stamford Bridge in January 2014 for an £18m fee the Belgian has been in stunning form; registering a staggering 25 assists and 15 goals in all competitions for the Bundesliga outfit.

It’s no surprise, therefore, that the 23-year-old is a wanted player in the summer transfer window.

Manchester City have been rumoured to be leading the chase for De Bruyne, however they face competition from German giants Bayern Munich and reigning Ligue 1 champions PSG.

His agent, Patrick De Koster confirmed the interest from the trio in an interview with talkSPORT. and revealed that they have all made ‘informal contact’.

“I have a meeting with Klaus Allofs [Wolfsburg’s sporting director] next week to find out what they want to do. I will know if they want to offer a Kevin a new deal or allow him to move.

“Manchester City, Bayern Munich and Paris Saint-Germain have made informal contact with me, but there have been no official offers,” he added.

“If Wolfsburg decide to sell Kevin, then he will have a choice of clubs who can win their domestic league and challenge for the Champions League as well. The choice is his.”

As Koster reveals, Wolfsburg’s Champions League qualification could make the difference in tempting the former Chelsea attacker into extending his stay at the Volkswagen Arena.

There are two Bundesliga games remaining, but the Wolves’ victory over Paderborn on Sunday afternoon secured their place in the group stages of the elite European competition for next season.