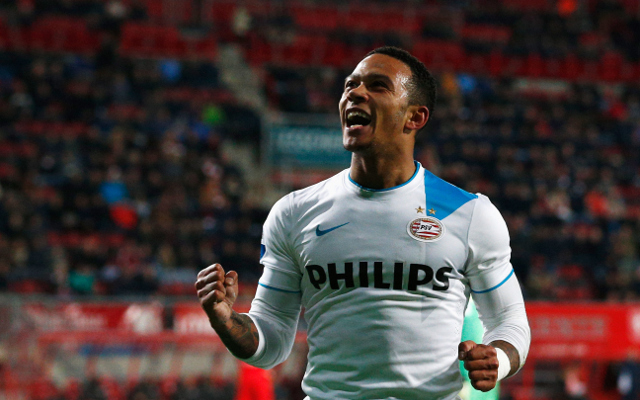 Manchester United’s newest signing Memphis Depay has set his sights very high for what he would like to achieve in the Premier League, by revealing that he wants to become one of the world’s best players, just like former Old Trafford star Cristiano Ronaldo.

The PSV Eindhoven star – who will move to Old Trafford in the summer – signed off in one of his final appearances for his current side with a fantastic free-kick that evoked memories of the Portuguese forward, in a 2-0 victory over Heracles.

According to The Sun, the 21-year-old is happy to be compared with the current Ballon d’Or holder, as he is one of a number of players that he is trying to emulate.

“I hope I can one day be like the big guys in the world,” he said.

When Ronaldo moved to Manchester in 2003, he was instantly thrown into the spotlight by being given the famous number 7 shirt, previously worn by the likes of Eric Cantona and George Best.

The Sun report that when asked about the possibility of wearing the number – currently held by Angel Di Maria – Depay responded: “It’s a dream, we will see.”

However, it could have been a very different future for the Dutch winger, had it not been for a last minute phone call from Louis van Gaal, according to The Sun. The pair worked together at international level, and his manager at last year’s World Cup managed to persuade him to turn down a move to Paris Saint-Germain to come to the Premier League.

“The transfer to PSG was really close. I always knew United were interested but it was nothing concrete. Then at the last moment they called and I spoke with their coach. It was a difficult situation but, after I spoke to Louis van Gaal, I said, ‘I am going to go to Manchester’,” he added.