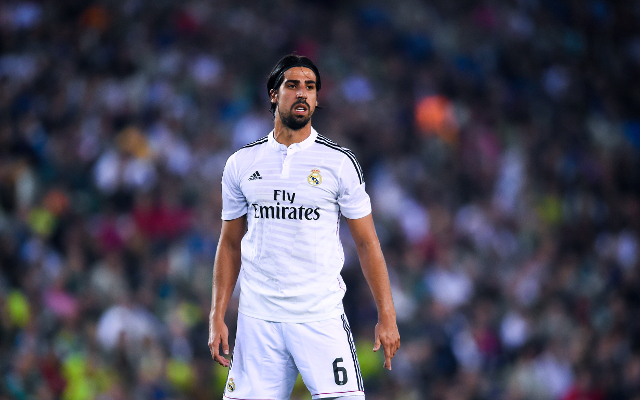 Arsenal, Chelsea and Manchester United’s hopes of signing Real Madrid midfielder Sami Khedira at the end of the season have taken a hit, as Schalke have confirmed their interest in his signature.

The German is a free agent in the summer, and has been linked with an array of clubs with his career at the Santiago Bernabeu looking to have ended.

Khedira doesn’t seem to be a part of Carlo Ancelotti’s future plans – making just three La Liga starts all season – as the Italian favours a partnership in midfield of Toni Kroos and Luka Modric.

It was made clear by Ancelotti that Khedira won’t play any part for Los Blancos next term when centre-back Sergio Ramos was preferred to the Germany international in midfield for the first-leg of their Champions League semi-final versus Juventus.

The Daily Express report that Schalke have leapfrogged Arsenal, Chelsea and Manchester United in the chase for his signature, and the Bundesliga outfit have confirmed their interest.

“I would prefer us to conduct our business in private,” said Schalke general manager Horst Heldt.

“But it is true that we want Khedira for the coming season,” Heldt added.

“However, we are not the only club who wants him.”

The World Cup winner’s future remains firmly in his hands, and Schalke look set to scupper his mooted move to the Premier League.