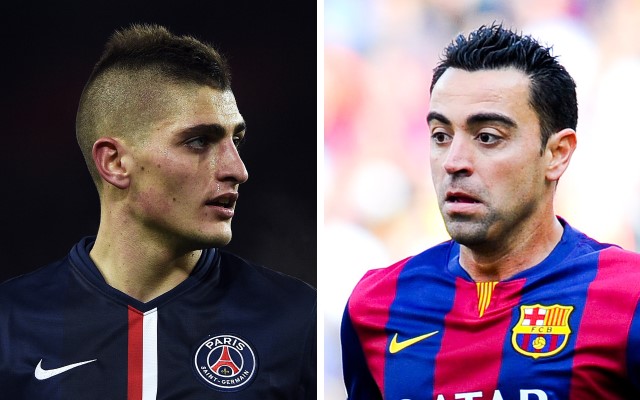 Verratti has been one of the stars of the Ligue 1 season and, as a result, has found himself elected for the Ligue 1 Player of the Season award.

While he faces tough competition for the prestigious prize—from the likes of teammates Javier Pastore and Zlatan Ibrahimovic, as well as top-scorer Alex Lacazette—Carriere has admitted that he wouldn’t be surprised if the midfielder was named as the league’s best.

Verratti’s form in France—he has contributed seven assists and two goals in 31 Ligue 1 appearances—has attracted interest from some of Europe’s major clubs, with the likes of Arsenal, Juventus and Bayern Munich all linked with a move.

Similarly, Barca are reported to have been interested in the player, seeing him as a potential replacement for club legend Xavi Hernandez, who may depart this summer.

Speaking to Le 10 Sport, four-time French champion Carriere has acknowledged that he sees a great similarity between the Barca icon and his potential successor.

“He’s 22, but he appears to be 30 when he’s on the pitch,” began the former Olympique Lyonnais and FC Nantes star, “he has become important in PSG’s system and has found a great balance.

“I often make the comparison with Xavi, who, for 10 years, organised the play for Barcelona. Today, Verratti has this same imprint on the Parisian game.”