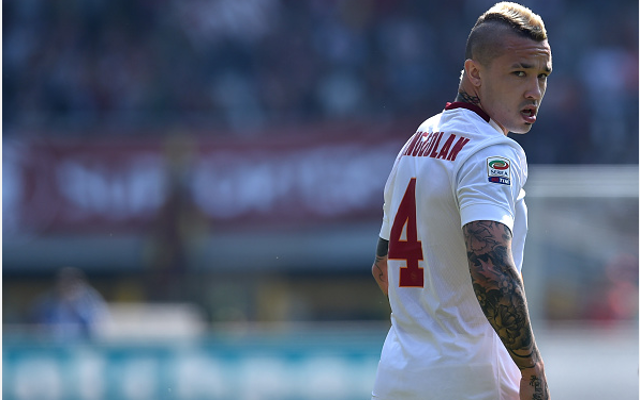 AS Roma midfielder Radja Nainggolan looks set to be one of the key protagonists of the upcoming transfer window.

The Belgium international is wanted in the Premier League, with both Liverpool and Manchester United reportedly keen on his services.

However, the EPL heavyweights now face serious competition with Italian giants Juventus also believed to be keen on the tenacious midfield star.

The Champions League semi-finalists may well need to reconfigure their midfield this summer and are targeting Nainggolan as a potential solution.

Paul Pogba has been linked with a move away from the club, with Paris Saint-Germain, United, Chelsea and Real Madrid all linked to his services. Similarly, Andrea Pirlo has been rumoured to be heading for the exit door, with Jose Mourinho’s side believed to be keen.

Finally, another central midfielder, Ghana international Kwadwo Asamoah, has also caught the attention of the management at Stamford Bridge.

Le Corriere dello Sport report that Juventus are keen to bring the Belgian onboard and have already begun discussions with Cagliari, who own 50 percent of the player.

PSG may also look to move for Nainggolan should they fail in a bid for Pogba.