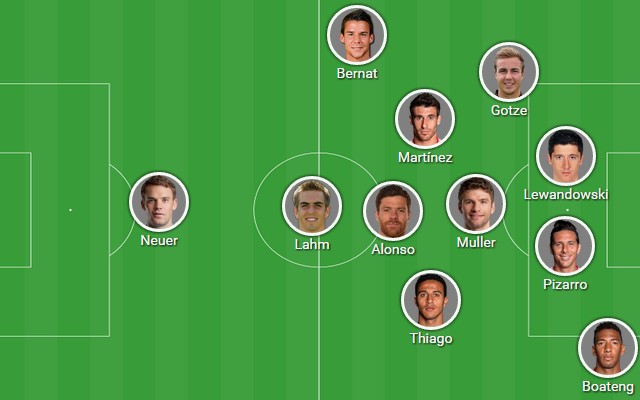 Much of the talk ahead of Bayern Munich’s Champions League semi-final second leg against Barcelona on Tuesday evening has focused on how the coach can overturn a 3-0 deficit to emerge victorious.

Obviously, the German giants need to go for it, and attack with all of the poise and panache that they demonstrated against FC Porto in their quarter-final second leg.

However, many pundits have been concerned with how the Bavarians can press forward while remaining tight at the back and keep their illustrious opponents at bay.

We’ve never been ones for half measures, and neither is Pep, and instead of worrying about how the Catalonians are going to terrorise Manuel Neuer, we reckon Guardiola should just throw caution to the wind and let the chips fall where they may.

The Spaniard is renowned for being one of the game’s great tactical innovators, and now, with nothing to lose, he must pull something special out of the bag.

He’s tried Phillip Lahm as a right-back, he’s tried him as a holding midfielder, maybe now’s the time for the Germany legend to try a new role.

After all, as the club’s most versatile player, could he not try his hand at something new…say, for example, a creative role as a Number 10?

What of Thomas Muller, the Interpreter of Space, the man who had a Football Manager position—the Raumdeuter—named in recognition of his superb work?

Well, another player who had a role named after him is Claude Makélélé, who did such an effective job at the base of the midfield.

With the rest of his Bayern teammates pushing forward, space will be in short supply in Bayern’s attacking third, so maybe Thomas could drop deep and find all the green, green grass he needs a little deeper on the pitch. Ok, well actually quite a lot deeper.

We propose a Lahm-Muller double pivot, with the pair swapping roles as a number 10 with a marshalling position at the back of the midfield.

Things can’t get any worse than they are, now, can they?

Also, for his own safety, we’ve decided to place Jerome Boateng as far away from the danger zone—and Lionel Messi—as possible.

Finally, nights like this call for heroes…an unlikely one if best…who more unlikely than 36-year-old Peruvian forward Claudio Pizarro. Throw him on, give him a start (only his third of the season) and let him rise to the occasion.

…and if he doesn’t, well, everyone needs a fall guy…