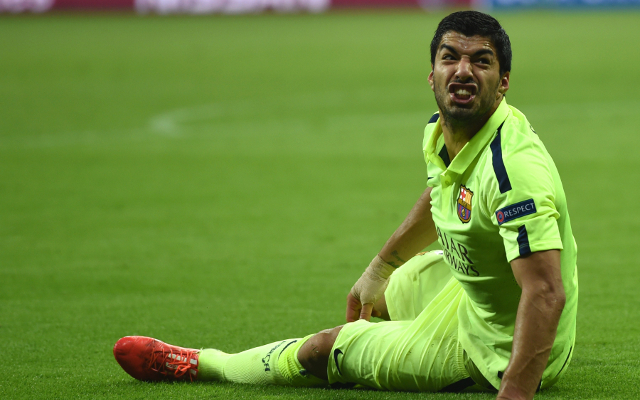 Luis Suarez is a doubt for Barcelona’s title decider against Atletico Madrid on Sunday evening after it was revealed through the club’s official website that he will miss training with a hamstring injury sustained in the Champions League semi-final against Bayern Munich.

The Uruguayan international was substituted at half time in the game at the Allianz Arena on Tuesday night with complaints about a hamstring strain and now it appears the injury may be worse than first feared, meaning he could miss the game at the Vicente Calderon at the weekend.

The La Liga leaders will clinch the title with a win against Diego Simeone’s side, but failing that they will be crowned champions if Real Madrid lose at Espanyol on the same night.

Suarez has overcome a slow start to his career at the Camp Nou to become one of the side’s key players and scored his first hat-trick for the club in the 8-0 victory against Cordoba at the start of the month.

He also created both goals for Neymar against Bayern as Barca clinched a Champions League final berth against Juventus next month.