Dnipro are through to their first ever European final after knocking out much fancied Napoli 2-1 on aggregate in the Europa League semi-final.

Striker Yevhen Seleznyov, who scored a fortunate equaliser in Naples in the first-leg last week, was the hero yet again as his goal just before the hour mark was enough to take the Ukrainians through to the final in Poland at the end of the month. 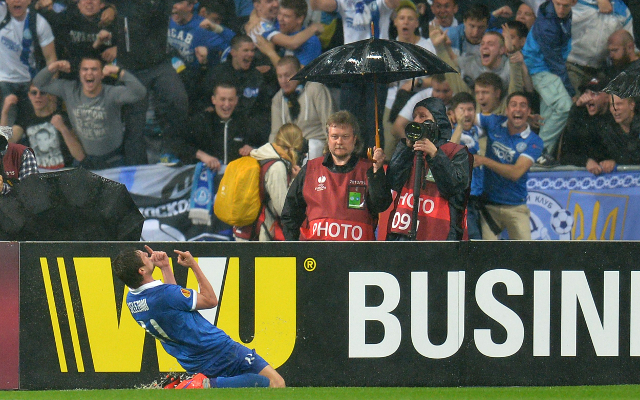 Dnipro have been strong at home in Europe this season and have now won their last five games in a row without conceding, but they will have to thank goalkeeper Denis Boyko as he pulled off a string of fine saves to deny Gonzalo Higuain in the first half.

Napoli came into the game unbeaten in their last four fixtures on the road  in Europe and created the first chance after just a minute through a set-piece but Higuain couldn’t steer his header on target.

The Argentine was frustrated by the Dnipro keeper again six minutes later after latching on to a fine pass from Gokhan Inler but saw his effort well saved by Boyko as the visitors increased the pressure.

Then late in the first half Boyka produced a fine fingertip save to divert the Napoli number nine’s header around the post and left the Argentine wondering how he was going to get the better of his nemesis.

Those missed chances came back to haunt Rafa Benitez’ side as Seleznyov headed in from close range just before the hour mark to put the Ukraine outfit 2-1 up on aggregate and left the Italians needing to score at least one to avoid crashing out of the competition.

Higuain had a cross cleared off the line late on but he and his team-mates couldn’t find a way past a stubborn defensive display and they could have conceded as second in injury time as the defence fell asleep and allowed Matheus to creep in and head against the post from close range.

But that miss would not prove to be costly as the final whistle blew shortly afterwards on a historic evening for Dnipro.

The Ukraninan outfit will face holders Sevilla in the Europa League final in Warsaw on May 27th as they look to finish off this remarkable season in Europe in style.