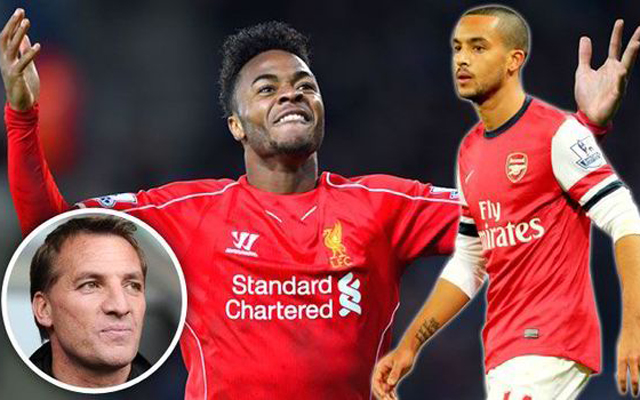 The 20-year-old has been in the midst of contract dispute with the Merseyside club, rejecting their offer of a £100,000-a-week five-year deal according to the Guardian. With the Reds looking unlikely to be in the Champions League next season, this could push the youngster closer to the exit door at Anfield.

Sterling won the European Golden award this year, reported by the Daily Mail, for the best U21 player on the continent, and while Liverpool would be keen to avoid selling such a bright talent to one of their fierce rivals, Walcott may be a good replacement.

Able to play in similar positions to Sterling, the 26-year-old also produces more for the team than his counterpart. The last time Walcott managed a campaign that wasn’t beset by injury concerns, he netted 14 and created another 10 goals in 32 top flight matches.

While he may be less skillful with the ball at his feet, the former Southampton man is quicker than his counterpart.

Speed has been sorely lacking from the Liverpool front line during the current campaign, and the Gunner could be the man to restore pace to the forward line after the departure of Luis Suarez and injuries to Daniel Sturridge.

Overall this could be a good move for both sides.

Brendan Rodgers gets a player who could help the Reds return to the Champions League, and some extra cash to spend on other reinforcements.

Arsene Wenger, by contrast, acquires a youngster who could turn Arsenal in to one of the best teams in Europe over the next few years.