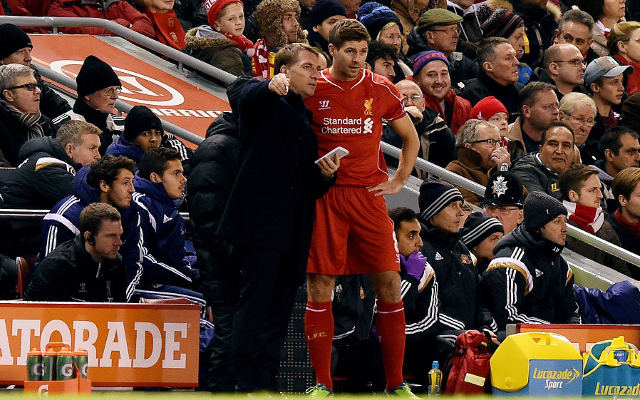 Brendan Rodgers has promised to assist departing Liverpool captain Steven Gerrard in any way he can, including helping him achieve his goal of becoming the club’s manager.

Gerrard plays his final home game as a Liverpool player later today, ahead of his summer move to LA Galaxy. Both Rodgers and Gerrard have been quizzed by the press this week, with the questions particularly focused on Gerrard’s future.

And according to the Daily Mirror, the Reds’ iconic midfielder could one day return to replace Rodgers in the club’s top job. Rodgers had already left the door open for Gerrard to join his coaching staff and it now appears as if the No. 8 has his sights set even higher.

Rodgers, who was quoted by the Mirror, explained: “I could work with him as a coach and if he wanted to go into management later down the line, I could help him prepare for that. But hopefully not here for a while!

“That opportunity for him to come back will always be there as long as I’m here. I think from those types of players, those iconic players, there at least has to be the offer. For me you can never have enough of those about because they understand the club and are the heartbeat of the club.”

The current Liverpool boss also hinted that Gerrard could yet return to the club as a player, on loan during the MLS off-season. A number of Premier League clubs have done this successfully in the past, most notably Liverpool’s local rivals Everton, who twice signed Landon Donovan.

Rodgers added: “The loan is something that could be a possibility further down the line, but it’s way too early to look at that now.”