Southampton’s final home game of the season ended in stylish fashion as they hammered relegation threatened Aston Villa 6-1 at St Mary’s on Saturday afternoon, in a fixture that will be forever remembered for Sadio Mane’s record breaking hat-trick.

The result leaves lifts the Saints above Tottenham in sixth place and they remain firmly in the hunt to qualify for the Europa League next season. 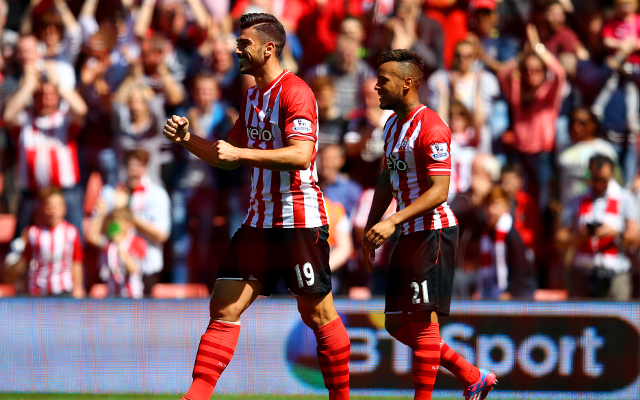 Graziano Pelle thought he had broken the deadlock early on but he was denied by the linesman’s offside flag and the replays showed it was the wrong call, then at the other end Christian Benteke wasted a good opening as he failed to hit the target from close range.

Mane scored his first of the afternoon in the 12th minute as he capitalised on confusion in the Villa defence to shrug off the challenge from Alan Hutton to slide the ball into an empty net.

Then just a minute later he had his second as he latched on to a loose ball in the penalty box to covert an easy tap-in after Shane Long had been denied by Shay Given.

Remarkably it was 3-0 seconds later as the Saints forward etched his name into Premier League history as he wrapped up his quick-fire hat-trick with a smart finish from just inside the area.

The Saints pushed forward for more goals against a shell-shocked Villa defence and Long bagged a brace inside 12 minutes, with his second being the goal of the day as he beat his Republic of Ireland team-mate Given from distance with a superb effort.

Benteke grabbed a slim lifeline for the visitors on the stroke of half-time as he headed the ball into the net after a delicious cross from the right-hand side by Leandro Bacuna.

The second half was quieter but the hosts did add gloss to the scoreline late on as Mane turned provider as he crossed for his strike partner Pelle, who emphatically slammed the ball into the net to make in 6-1 and round off a historic day on the South coast.

Villa boss Tim Sherwood will be hoping for a favour from his former club Spurs as a win for them against Hull City later in the day will confirm their status in the Premier League for next season.