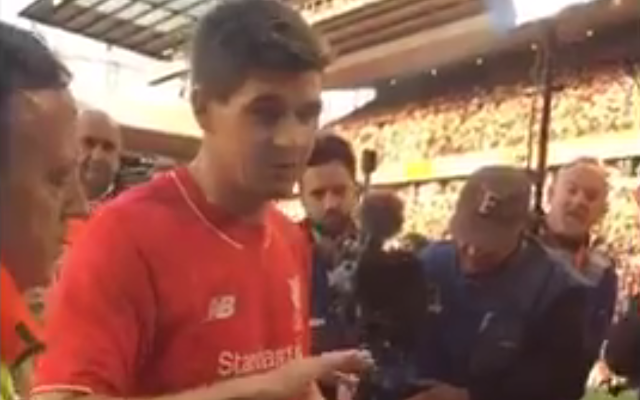 Steven Gerrard summed up his incredible loyalty to Liverpool by refusing to sign any memorabilia that didn’t belong to the Reds – including LA Galaxy shirts – on his Anfield farewell at the weekend.

Twitter user, @WadeMuscart, took to the social media site to upload a clip of Gerrard declining to autograph an LA Galaxy shirt as the midfielder walked around Anfield to say his goodbyes to the home supporters.

The Reds skipper said, “I’m not signing the LA Galaxy one ’til I’m there”.

Watch the fan footage of the surprising moment below…

Crystal Palace proved to be the party poopers on the midfielder’s Anfield bow-out, as they fought back from a goal down to win 3-1 and deny the former England captain a victory on his final home game for his boyhood club.

The 34-year-old now has just one more game to play in the shirt of Liverpool – versus Stoke City – before jetting off to the States where he will meet up with his new team-mates in Los Angeles.