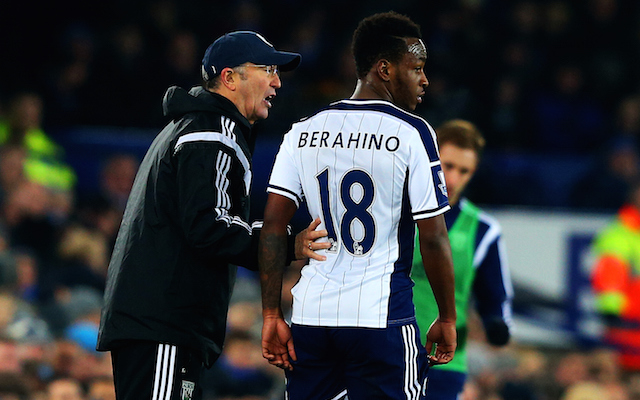 The England Under-21 striker has had a superb campaign in the Premier League, looking one of the most promising young talents in the country as he has hit 18 goals in all competitions for the Baggies.

This has seen Berahino linked with the likes of United, Liverpool and Tottenham, as well as with Manchester City as a number of big clubs look to add quality upfront this summer.

There’s no doubt the likes of Liverpool and United could benefit from Berahino’s quality in attack, with the 21-year-old a pacey and skillful forward with a great eye for goal.

Still, Pulis is keen to keep the player at the Hawthorns for now, speaking highly of his improvement in recent times with regard to his discipline and his conduct in the squad.

“I think the kid should stay, I have said that to him,” the Welshman is quoted in the Daily Mirror.

“He is enjoying his football and he has a better rapport now with everybody around the football club and is a better lad than when I first walked through the door. He is more open, together and integrated in the group.”