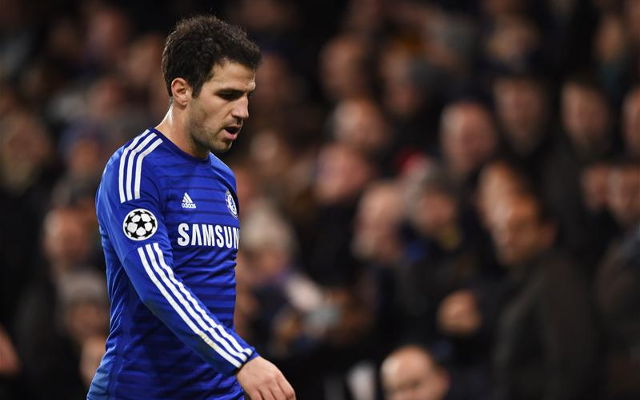 Chelsea midfielder Cesc Fabregas has been shown a straight red card during his side’s Barclays Premier League fixture against West Brom at The Hawthorns on Monday night.

It was one of the most bizarre sending-offs this season – and appeared totally out of character for someone of Fabregas’ usually calm nature, especially given that the Blues ought to be able to relax with the Premier League title sewn up.

The incident occurred just before the half-hour mark following a heated confrontation involving Diego Costa and several Baggies defenders. As the officials were dealing with the situation, Fabregas – who was some distance from both the fracas and the officials – needlessly booted the ball right in the face of Chris Brunt. He was promptly shown his first red card since joining the Blues last summer.

He will now miss Chelsea’s last game of the season against Sunderland at Stamford Bridge on Sunday afternoon, and will be unable to take to the pitch on the day where he gets his hands on a Premier League medal for the first time in his career.

The Blues fell behind in the eighth minute as Saido Berahino found the back of the net with a superb finish.