Barclays Premier League champions Chelsea were brought back down to earth with a crashing bump as they were comprehensively beaten 3-0 by West Brom at The Hawthorns on Monday night. Watch video highlights.

The defeat is Jose Mourinho side’s first in the league since New Years Day when they lost 5-3 in a London derby against Tottenham at White Hart Lane. But while they were able to score three on that occasion, they were well short of their best against the Baggies and were also reduced to ten-men in the first half as Cesc Fabregas was shown a straight red in bizarre fashion.

Blues top-scorer Diego Costa returned to the starting XI after missing the last six game with a hamstring injury and there was a second successive start for highly-rated young midfielder Ruben Loftus-Cheek. 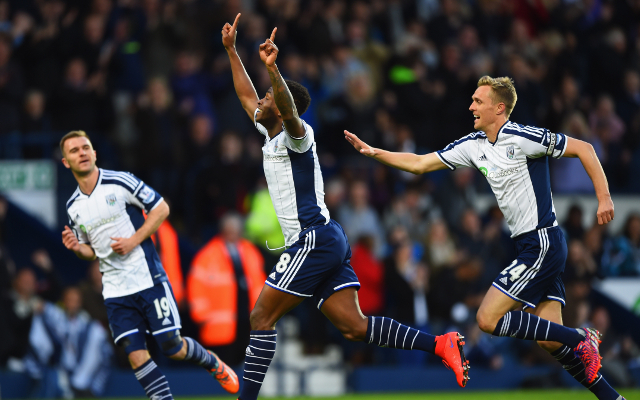 Callum McManaman had the first chance of the game early on as his fierce effort was pushed away for a corner by Thibaut Courtois, but the Belgian stopper could do nothing about the opener from Saido Berahino.

The England under 21 star curled the ball into the top corner from outside the area to give the home side the lead after just eight minutes.

Minutes before the half hour mark came a moment of petulance from Fabregas as he needlessly got himself sent-off for kicking the ball into the face of Chris Brunt whilst the official was busy dealing with a heated confrontation involving Costa and what seemed like the entire Baggies team.

That red card gave the visitors a mountain to climb and that task got a lot more difficult right at the start of the second half when John Terry conceded a penalty when he hauled down Berahino in the box. The former England captain was lucky to stay on the field after preventing a clear goalscoring opportunity, but regardless, Baggies forward dusted himself down and converted the spot-kick for his second of the game.

Loic Remy went close to grabbing one back for the champions but his effort from just outside the area came back off the post with Boaz Myhill beaten.

Not so long after that chance it was 3-0 as Courtois was beaten at his near post by a fierce effort from Brunt to complete a miserable night for the Blues – but a memorable one for the hosts.

As powerful as the shot was from Brunt, a goalkeeper of Courtois’ calibre ought not to be caught out by the strike.